We’ve reported extensively on this legislation before, so be sure to check out our other articles here and here.  The short version is that SAPA legislation effectively nullifies all federal gun control — past, present and future — by making it illegal for any Missouri law enforcement or government officials to enforce federal gun control.

A Bill With Teeth

Unlike previous legislation along the same lines, such as the “Firearms Freedom Act” legislation that was popular during Barak Obama’s term, this legislation has teeth.

The problem with the Firearms Freedom Act legislation was that it left the state’s attorney general in charge of going after any state employee who violated the gun rights of a citizen by enforcing gun control.0

Needless to say, many attorney generals agree with the anti-gun crowd and wouldn’t lift a finger to help gun owners!

But SAPA legislation allows the gun owner whose rights have been violated to go after the state employee in civil court!

You can see why this legislation is extremely popular with gun owners — especially those in historically ‘red’ states.

The Left Is Trying To Mount Opposition

Not everybody wants to pass this legislation, of  course.  We reported last week how the political organization that is the Missouri Sheriffs Association had come out against the bill — likely because they’d lose extra funding once they stopped enforcing federal law for the feds.

But on top of that, two state Representatives have filed the same gun control bills at a state level that Joe Biden and Nancy Pelosi announced on February 14th that they want to see passed at the federal level!

They seem to be worried that SAPA is going to pass and are trying to quickly put state gun control on the books since federal gun control laws won’t have effect in Missouri!

The left is scrambling…so what are Republican Senators doing?

Rep. Jered Taylor’s SAPA legislation sailed through the house with a vote of 107 to 43.  Meanwhile, in the Senate, Taylor’s ‘sister bill’ had been brought forward by Senator Eric Burlison and it already had lots of cosponsors.

It was expected that the Senate would hear the bill within a day or two of it passing the House and gun owners could see victory just around the corner!

But the Senate hasn’t brought it up for a committee vote yet, much less the full floor vote!  Taylor and Burlison had done their part….but the Senate isn’t moving the bill!

Not content to let moderate Republicans Senators run out the clock, the third player on SAPA’s home run team got right back up to the plate.

The Missouri Firearms Coalition — the state’s largest and most powerful gun rights organization — has worked with Senator Burlison and Rep. Taylor to advance gun rights in Missouri for years, and they’re behind the explosive SAPA legislation!

Instead of asking to have a coffee lunch with a legislator, kissing up to a few key politicians or watering down the bill, the MOFC just started slugging away.

They released this ad on their Facebook page which they reported had over 20,000 views in just 48 hours. 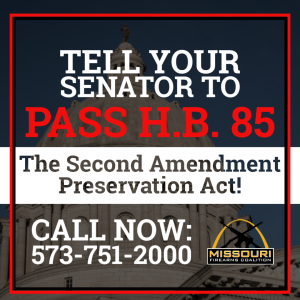 They also sent this ad out on their Facebook page and sent the audio from it over the radio on some of the state’s largest stations:

New Tactics For A New Fight

These sorts of tactics are a big change from the ‘just be nice to everybody and everybody will be nice to you’ tactics of other gun rights organizations.  The left hasn’t played politics that way for a decade but the right has been slow to catch on — much less catch up!

But finally, one organization is playing the game to WIN!   The Missouri Firearms Coalition is leading the fight to advance gun rights in Missouri — and other states are taking notice!