These bills would create a master list of every single gun owner in the state of Missouri.  And that’s not just what the ‘pro-gun’ crowd would call it. That’s exactly what the BILL calls it!

This bill of Rep. Windham would force gun owners in Missouri to give the following information to their Attorney General every single year:

And any gun owner who doesn’t submit their paperwork to the government before March 1st every single year would face a civil penalty of $5,000!

This is the sort of gun control law that the left has always dreamed of! 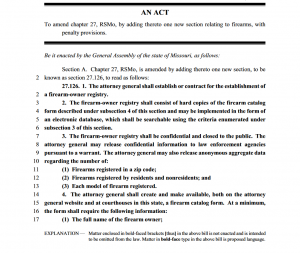 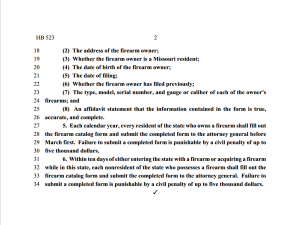 The wording of Senator Jill Schupp’s S.B. 15 is very similar in that it requires gun owners to record every firearm they purchase with the FBI via a NICS check!

But this time, instead of facing a civil fine if they don’t get their paperwork done properly, gun owners would be staring down the barrel of criminal charges!

Why Missouri and Why Now?

Of course, we can’t get inside the minds of these two Democrat legislators — who wants to?? — but given the booming support that pro-gun legislation is getting in Missouri right now, we imagine that they’re a little worried.

After all, Missouri is poised to be the first state to pass the Second Amendment Preservation Act, or SAPA law.  To learn more about it, go here. To see commonly asked questions asked and answered, go here.

This SAPA legislation, filed by pro-gun rock-star Rep. Jered Taylor, would essentially nullify all federal gun control at the border of the state by now allowing any Missouri law enforcement officers or government officials from enforcing any federal gun control.

It basically cuts the legs out from underneath any nasty new gun control that Joe Biden and Kamala Harris and a Democrat legislature might try to ram through.

We have reported before how this SAPA legislation is booming in Missouri — and recently passing the House by a vote of 107 to 43!

Over in the Missouri Senate, pro-gun Senator Eric Burlison already has a version of the bill that is enjoying immense support!

So in the very near future, it’s very likely that Joe Biden and Kamala Harris might pass new Federal gun control that never gets put into effect in the state of Missouri!

What’s a radical leftist legislator to do?  Why, file lots of state gun control bills! That way Missourians still have to submit to all the nasty gun control legislation that Biden and Co want to spew out of Washington, D.C. because it’s all originating at the state level!

Stop Them In Their Tracks

It would be a good idea for gun owners to continue to pour the same political heat into the Capitol on this gun bill and any others that angry anti-gun radicals try to file!