In case you had remembered that actress Alyssa Milano existed, here’s another chance to forget her again!  The B-list celebrity took to twitter this week to attack Americans who think that guns add more to their safety than masks do.

The actress tweeted, “Anti-maskers are the same people who think they need an AR-15 for “protection”. LOUDER FOR THE PEOPLE IN THE BACK: A MASK WILL PROTECT YOU *MORE* THAN AN AR-15 WILL.”

Anti-maskers are the same people who think they need an AR-15 for “protection”.

LOUDER FOR THE PEOPLE IN THE BACK: A MASK WILL PROTECT YOU *MORE* THAN AN AR-15 WILL.

This is Milano’s second screed about masks in the last ten days, as she took Instagram on December 19th for a message on her Birthday.

In that message, she attacked “flag waving and gun toting” Americans, saying that they talked about ‘freedom’ but that true freedom was really all about government handouts. 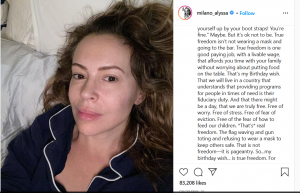 Elitist Americans Only Faced One Threat In 2020

Milano might live in a fancy gated community with a little rent-a-cop at the entrance, but for the average American, this year brought two threats: the Corona Scare and the rioting looters in the streets of America’s cities.

Even more alarming to Americans was the realization that the violent rioters would not face charges from Soro-funded, leftist prosecutors like Chicago’s Kim Foxx and St. Louis’ Kim Gardner.

For leftists like Milano, she might only be worried about the virus, but for the average Joe, they don’t have the luxury of assuming that bad guys won’t be able to hurt them or their families!

How typical of an elitist leftist to be so blinded by her privileged life that she can’t even empathize with average people anymore.  Very sad!

Milano ignores stories like this one, where a good Samaritan heard his landlady being beaten and robbed by two thugs.  The man came to her rescue with an AR-15 in hand!  He and the woman were fine, but the two violent criminals ended up in the morgue.

In this story, an Omaha man heard loud knocking at his front door and saw two masked men with gun outside his peephole.  He immediately grabbed his AR-15 and fought the two men off — and undoubtedly saved his own life in the process!

Or this disabled Florida man, 61, who was wheelchair bound when he used his AR-15 to face down four armed attackers!  He suffered a shotgun wound to the belly, but two of the thugs were killed and the other two were arrested.

Or this story, where a woman who was eight months pregnant defended her family from a violent attacker with an AR-15, leaving the armed attacker dead in the ditch.

In fact, an entire panel of female gun owners agreed: the AR-15 is their home-defense weapon of choice!

But for Milano, these stories — and these people — don’t matter.  Only her perfect little rich-girl world seems real to her.  Like so many babbling, unemployed Hollywood celebrities, they more they talk, the more out of touch and more deranged they seem.