“You can’t have your cake and eat it, too.”  An old adage is ringing true for the librarians in Nevada’s Douglas County.  Sheriff Daniel Coverley published a public letter to the county’s librarians telling them not to call 911 after they voiced their support the Black Lives Matter movement.

Coverley’s letter comes in response to an announcement from the library board that they planned to publish a statement in support of “diversity and inclusion.”

Prior to the meeting, they had published a “Statement on Diversity” for consideration at the meeting.

You can see all relevant text here: 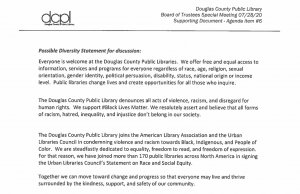 Of course, the library is taxpayer funded — as all libraries are — and thus this wasn’t a new policy.  No business in America is allowed to discriminate on race.  That’s been the law for decades.

Statements like this from the library only embolden the radical left, because they can point to community leaders like the library board validating their destructive agenda.

The Library Director, Amy Dodson told the Reno Gazette Journal that the diversity statement “simply was meant to state our inclusivity at the library, that we are open and welcoming to everyone and we treat everyone equally.”

We already know that, because it’s the law!  The librarian wants to  pretend that she wasn’t siding with the radical BLM crowd, just being ‘loving and kind.’

Sell That Load of Bull To Somebody Else

Sheriff Coverley wasn’t impressed.  He responded in a letter published on the County Sheriff’s website.  We’ve included the entire text at the end of this article.

“Due to your support of Black Lives Matter and the obvious lack of support or trust with the Douglas County Sheriff’s Office, please do not feel the need to call 911 for help. I wish you good luck with disturbances and lewd behavior,since those are just some of the recent calls my office has assisted you with in the past.”

Earlier in his letter, Coverley detailed why their support of Black Lives Matter was an insult to the police officers that protect their community:

The Black Lives Matter movement openly calls all law enforcement corrupt and racist on their website. They call for the defunding of police, and we have seen how a lack of active law-enforcement has worked in Seattle, Washington and Portland, Oregon. Numerous Black Lives Matter protests have resulted in violence, property damage and the closing of local businesses, sometimes permanently. To support this movement is to support violence and to openly ask for it to happen in Douglas County.

Coverley was elected Sheriff in 2019, but has worked for the police department in Douglas County since 1997.  He’s well aware of the true threats to the community.

Those grandstanding librarians didn’t get far with him around to stomp on their virtue signaling!  The librarians have since canceled their proposed meeting, though they indicated they would revisit the issue at a later date.

We MUST Stand Up To The Mobs

After his letter, Sheriff Coverley was made to meet up with Librarian Amy Dodson and they both came out with a statement saying they all just want the best for their County.

But Coverley’s stand for his community to not bow to the leftists had an effect.  They didn’t hold their meeting, and now are under intense public scrutiny for their disingenuous statement meant to encourage radicals.

THIS is how we should treat these radical leftists on the gun issue.

After all, politicians and the media on the left ignore their shock troops, Antifa, while they not only burn, loot, and destroy but even when they carry guns and shoot into traffic on the interstate.   The left goes so far as to brush it under the rug when their radical brownshirts kill people.

But when law-abiding gun owners speak up to defend our God-given, Constitutionally protected gun rights, they screech that we don’t care about the lives of children and are ‘angry white racists.’

We have no use for sellouts and compromisers!  If we wanted to lose our gun rights, we’d elect anti-gun legislators!  But our ‘pro-gun’ legislators often think that as long as they sell us down the river slowly, we won’t blame them!

They’re wrong!  The era of accepting compromise is OVER.

The tragic and preventable death of George Floyd at the hands of four Minneapolis Police officers shined a national spotlight on bad actors within the law enforcement profession. At the same time, data simply does not support claims that law enforcement is systemically racist or structurally biased. Despite the lack of available evidence to support the anti-police narrative, it proliferates and has spawned radical reactions such as the current calls to “defund the police,” as well as increases in violence against police—ranging from assaults to assassinations.

Last year in the United States, a country with a population of 330 million people, 1,004 civilians were fatally shot by police officers. The vast majority of these officer-involved shootings were justifiable, and most involved an armed or dangerous subject. There were nine fatal shootings of unarmed black persons (down from thirty-eight in 2015) and nineteen fatal shooting of unarmed white persons (down from thirty-two in 2015) those deaths represent 0.1% of all black homicide victims and 0.3% of all white homicide victims.

The data indicate that exceedingly few encounters with police involve force. For example, only 2% of people who had any contact with police anytime in the prior twelve months said that officers used or even threatened to use force against them, according to the 2015 Police-Public Contact Survey conducted by United States Bureau of Justice Statistics. Over 58,000 officers were assaulted while

performing their duties in 2018, according to FBI data collected from only two-thirds of law enforcement agencies. That is an assault rate of 10.8 per 100 officers. Moreover, assaults with deadly weapons against the police occurred thirty-three times per day.

Recent history confirms that when myths about the police are not strongly repudiated by our local, state and national leaders, law-enforcement officers lose their lives. In 2016, following a national rebellion against law enforcement —like what we are experiencing today —the number of officers shot and killed in the line of duty increased by 56% in that year alone. Twenty-one of those deaths were ambush-style shootings of law-enforcement officers. Who can forget the fine officers murdered in attacks in Dallas, Texas, and the three officers murdered in Baton Rouge, Louisiana in only a ten-day period? In recent weeks of national unrest, 750 officers have already been injured defending their communities from the violence that has swept our country. Two members of law enforcement have already lost their lives.

The Douglas County Sheriffs Office is constantly evolving to ensure that training, resources and practices will best protect the safety of both the citizenry and the deputies. These men and women

regularly receive advanced certificates and degrees, use new equipment and technology, and engage in regular trainings. I know this because I oversee the training, and ensure we are training to the highest level at all times. The Douglas County Sheriff’s Office reflects the diversity that is seen in our community, and we make it a priority to treat all persons with respect regardless of race, gender or cultural differences.

The Douglas County Sheriffs Office is the only local law-enforcement agency in Douglas County and it is the men and women of DCSO that keep you safe. The Black Lives Matter movement openly calls all law enforcement corrupt and racist on their website. They call for the defunding of police, and we have seen how a lack of active law-enforcement has worked in Seattle, Washington and Portland, Oregon.

Numerous Black Lives Matter protests have resulted in violence, property damage and the closing of local businesses, sometimes permanently. To support this movement is to support violence and to openly ask for it to happen in Douglas County.

Due to your support of Black Lives Matter and the obvious lack of support or trust with the Douglas County Sheriff’s Office, please do not feel the need to call 911 for help. I wish you good luck with disturbances and lewd behavior, since those are just some of the recent calls my office has assisted you with in the past.