In Defense Of Kenosha Kyle — The Left Pounced Before The Facts Were Known AGAIN!

Kenosha,  WI —  The far left media loves the rioting, destructive protestors because those violent criminals are their own shock troops.  That’s why they aren’t reporting on the widespread rioting and destruction happening EVERY SINGLE DAY in America.

But when an American stands up to defend themselves or their property from the violent, criminal mob, the media pounces on them.

That’s the case with Kyle Rittenhouse — who we’re dubbing Kenosha Kyle — a 17-year-old boy who shot and killed two protestors and wounded another after being attacked on the streets of Kenosha on Tuesday night.

When news broke of the shooting, the left immediately started their leftist spin narrative:  a racist, angry, violent white man attacked innocent, childlike, peaceful protestors who wanted justice for a black man who had been wrongly shot by police. 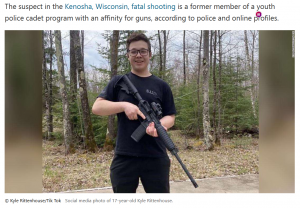 Notice they list his race — not something they’ll do when reporting on crimes committed by black Americans or the rivers of blood flowing in our nations largely minority cities like Chicago, Atlanta, Philadelphia, and New York.

They also cut off the rest of the picture, showing the dorky shoes and scrawny legs of a teenage boy.  MSN and others show him looking as menacing as possible — highlighting the gun and dark clothing — but removing the rest of the image that helps the viewer see that this is just a boy.

Check out the carefully chosen words they used to describe what happened:

They omitted the details about WHY Kyle was running: he was being pursued by an angry mob who were throwing things at him.  Initial reports said that the first person Kyle shot was throwing a Molotov cocktail at him and while that’s unconfirmed, we can all SEE the now-dead protestor was chasing and throwing something at Kyle.

Earlier reports from Kenosha police confirm that protestors had been throwing bricks that evening.

According to the leftist spin, Kyle wasn’t on the defense against violent rioters destroying property in Kenosha!  No, according to them, he ‘took his rifle to confront the unrest’ and was ‘idolizing’ and ‘fixated’ on the police.

And heaven help us, the boy likes President Trump!

The kid was interviewed earlier in the day and didn’t say anything at all racist, or political, or inflammatory — unlike Garrett Foster — but was simply there to help protect local businesses.

CONTEXT: I spoke with the alleged shooter earlier in the night who stated he was there to protect property

He did not make racist comments, condemn #BLM, or mention political motivations for his actions

He said that he was there to protect property & was carrying a firearm pic.twitter.com/ViYUB65tiy

Check out how peaceful things were that evening BEFORE Kyle was chased and shot in self-defense:

Rioters are getting into confrontations with armed citizens who are out here to prevent looting and destruction to businesses. pic.twitter.com/f65YkP24kG

This footage was taken the day before the shooting:

On the ground in Kenosha, WI for @townhallcom.

Currently surveying the damage after the riots that occurred in response to the police shooting of Jacob Blake. A lot of buildings are boarded up, including the Kenosha County Democratic Party building. pic.twitter.com/0HmfGaWaoN

Are We Sure Kyle’s The Good Guy?

We don’t have all the facts, so we’re not claiming that Kyle Rittenhouse is an American hero — yet.

But if our readers care to see this shooting from every available camera angle and see his actions in full context, check out this video.  It’s eight minutes long, but it gives the best summary we’ve seen — without any leftist spin!

We don’t know for certain that Kenosha Kyle was carrying his gun legally.  We don’t know why he was in the city — though rumors online say he or his family own property in the town.  Some have made the claim that not only did his family own a local business, but this entire confrontation began in front of his family’s business.

We can’t verify those rumors, so we aren’t going to make that claim.

We do know that the arrest warrant and subsequent murder charges came from the anti-gun state of Illinois.  That is to say, Kyle hasn’t been charged with first-degree murder by the prosecuting attorney in Wisconsin, where the shooting took place.  He may yet be, but it’s interesting that the charges came from Illinois.

We can’t say we’d put our 17-year-old with an AR-15 on the streets filled with violent protestors.  But even if the gun was carried illegally, that’s a weapons charge, not first-degree murder.

The message here for gun owners is this: the left will destroy your life on a technicality.  Try to avoid these violent cities if you can. We are enraged for those who have to face this rioting and burning and destruction in their neighborhood — only to have the police ordered to stand down.

You can’t placate the mob.  You can’t satisfy the blood lust of the left.  The party that is okay with murdering millions of babies in the womb doesn’t care about businesses burnt to the ground or hundreds of millions of dollars in damages done.  They don’t care about the rising crime rates in the cities where the police have had their hands tied.

This is why our legislators trying to play nice with the anti-gun left are a BIG part of the problem.  They’re stuck in 1992 and haven’t realized that the left isn’t out to play fair or play nice.  The compromises from our side are nothing short of a total victory for the left.

The left is playing hard ball and a long game.  Any legislator who claim to be pro-gun had better be down for a slug-fest against the radical left!  Either that or they should get ready for gun owners to send them packing.

Carry every day, know the law, and be ready for anything.