We reported yesterday that the Carbon County GOP had officially censured Liz Cheney for her vote to impeach Donald Trump.

But gun owners — and all Republican voters — got some great news today when Senator Anthony Bouchard (District 6) announced that he would be running against Cheney for Wyoming’s single, at-large U.S. Congressional seat. 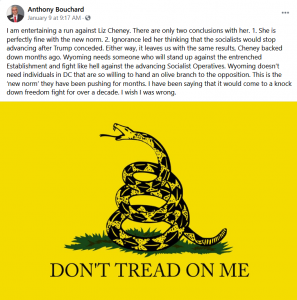 A Long History Of 2A Victories And Defeating RINO Opponents

We’ve written about Senator Bouchard many times in the past, and have dubbed him a rock star in the battle to expand gun rights in Wyoming!

Bouchard was a founding member of the biggest and most effective gun rights group in the state, Wyoming Gun Owners.  Bouchard — with the help of Wyoming Gun Owners’ members and supporters — made Constitutional Carry a reality when he was on the board!

In 2018, Bouchard was elected as Senator in District 6 after a brutal primary challenge and general election, ending his time on the board of the Wyoming Gun Owners. But unlike so many Republican legislators, Bouchard didn’t forget about gun owners once he got elected. In fact, he quickly showed he wasn’t in Cheyenne to make friends with the political class!

After taking office in 2017, Senator Bouchard sponsored and delivered the best Stand-Your-Ground law in the nation just months later, in 2018!  So much for ‘This is a long battle and you can’t just rush in and expect to get things done!  You have to just accept that this stuff takes decades!’

Not content with passing Constitutional Carry and Stand-Your-Ground — two accomplishments that would have bought him a lifetime of respect from Wyoming gun owners — fighter Bouchard then went after deadly Gun Free Zones. Of course, gun owners know that Gun Free Zones should be renamed ‘Fish-In-A-Barrel Zones!’

The Political Class Hates Him For All The Right Reasons!

By 2019, Senator Bouchard had drawn plenty of anger from moderate Republicans in Cheyenne. They hated that he wasn’t playing nice — and for showing Wyoming voters the truth that they were spineless sellouts and cowards!

They retaliated by mounting a savage political attack by his own party during the 2020 primary, but again came out victorious.  And this wasn’t a small victory!  We reported at the time that Senator Bouchard defeated the most well-funded general election state senate candidate in Wyoming history.

This might all seem familiar to President Trump’s voters: Bouchard has had to fight the left, the media, but the worst hits have come from the swamp monsters of the Republican party in Cheyenne!

They all want to silence this great American freedom fighter but they can’t do it!

And now, in the best news you’ll hear on this otherwise sober day, Wyoming Senator Anthony Bouchard has set his political sights on Liz Cheney’s seat!  We know that Cheney will have a huge war chest filled by leftists , sellout RINOS and cowards, but based on his history, our money is on Bouchard.

The Voters Are Ready

Gun owners and all Republican voters in Wyoming have had enough. It’s bad enough to watch the events of the last ten months unfold in Washington, D.C. and other far-off places.  But to have their own Congresswoman attacking the President after he received more than 70% of the popular vote in Wyoming?  They’re not going to stand for it.

We reported yesterday that another county GOP came out strongly against Cheney’s actions, saying in part:

The wind in Wyoming has been horrendous today—with gusts up to 65 miles per hour. That is nothing compared to the whirlwind created by Representative Cheney’s announcement that she would be voting to impeach President Trump, and her subsequent follow-through of doing just that.

There has not been a time during our tenure when we have seen this type of an outcry from our fellow Republicans, with the anger and frustration being palpable in the comments we have received. Our telephone has not stopped ringing, our email is filling up, and our website has seen more traffic than at any previous time. The consensus is clear that those who are reaching out to the Party vehemently disagree with Representative Cheney’s decision and actions.

They’ve not only had enough, they’re ready to do something about it — and now they have a dream candidate willing to stand up to the Republican party leadership who want to maintain the status quo!

It’s those exact voters who will help send Liz Cheney packing in 2022!