When it comes to Republican legislators, many gun owners have held an attitude of, “I know they’re not great, but they’re better than the other guy!”

But that era is ending, as Representative Liz Cheney of Wyoming is the first Republican to face the blistering heat of angry constituents who are upset at Cheney’s anti-Trump actions in the last two weeks.

Specifically, the Carbon County, Wyoming GOP has voted to censure Rep. Liz Cheney for her vote to impeach President Trump.  Cheney was one of ten Republicans nationwide who joined the Democrat effort to unseat the President in his last few days in office.

Even worse was Cheney’s response to Wyoming residents, when she said, “I’m not going anywhere.”

The outcry from Wyoming voters can’t be overstated.

The wind in Wyoming has been horrendous today—with gusts up to 65 miles per hour. That is nothing compared to the whirlwind created by Representative Cheney’s announcement that she would be voting to impeach President Trump, and her subsequent follow-through of doing just that.

There has not been a time during our tenure when we have seen this type of an outcry from our fellow Republicans, with the anger and frustration being palpable in the comments we have received. Our telephone has not stopped ringing, our email is filling up, and our website has seen more traffic than at any previous time. The consensus is clear that those who are reaching out to the Party vehemently disagree with Representative Cheney’s decision and actions.

You Can’t Sell That BS To Wyoming Voters

The Carbon County Wyoming GOP went on to summarize the thousands of objections they had received from voters in response to Cheney’s actions, including this partial list:

Called To The Woodshed 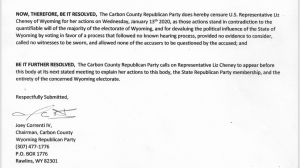 This is exactly what needs to happen!  Sellouts, RINOS, and cowards have infested the GOP for years.  But the high cost of their treachery is just now coming due — and the price tag might just bankrupt everything we love about America.

Frequent readers know that we end nearly every article reminding gun owners that they’re involved in two fights.  The first one is against the billionaire-funded, 100% committed, far-left anti-gun crowd.  That isn’t news.

But the second and less obvious fight is the one against the dead weight in the GOP!  The party needs to purge itself of these ‘pro-gun’ sellouts who have compromised our gun rights one inch at a time until we’ve arrived at the gates of hell — and have nothing to show for it!

The era of friendly, gentlemen politics is OVER.  The left knows it and their tactics reflect it.  It’s time for our side to play for keeps — like the left is already doing!

If you’re not a member of a down-and-dirty grassroots gun organization in your state, join one!  If there isn’t one, join the rapidly-growing American Firearms Association.

A new era of politics is long overdue — and every gun owner counts.