Gun sales have been a hot news item this year, and August will be no different.  While the pace wasn’t as frenzied as other months of 2020 have been, it still blew every other August out of the water.

Americans ran 3.1 million background checks run through the FBI’s NICS system, including an estimated 1.2 million first-time buyers.  That’s assuming the commonly accepted metric — that 40% of gun sales were to first time gun owners — held true in August like it did  for the first seven months of the year.

This chart provided by the FBI compares August 2020 to every other August on record: 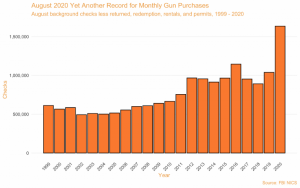 Of course, NICS checks don’t catch all gun sales, since people with concealed carry permits have already passed a NICS check to get their permit and don’t have to repeat that process to buy a gun.  Additionally, a single NICS check allows the buyer to purchase several guns at one time.

2020 Is Going To Break All Records

Even if gun sales level out to ‘average’ levels for the rest of the year, 2020 is still shaping up to be the biggest year for gun sales in history.

Every single month so far has beaten the previous years’ records.  In fact, sales are up 43% over last year for the entire country. 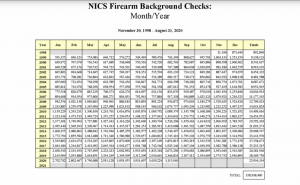 Gun sales continue to climb as civil unrest dominates the news cycle.  After the shooting of Jacob Blake in Kenosha, Wisconsin, the country was plunged into more rioting and destruction.

Black Lives Matter protests across the country have devolved into violent riots time and again — as we saw in the case of Kenosha Kyle Rittenhouse, who made global headlines in August when he defended himself against violent protestors with an AR-15.

The Election Gets Closer Every Day

In addition to the unrest in the streets of even medium sized towns like Kenosha, Wisconsin — with just over 100,000 residents — there is no reassurance that the violence and destruction will stop any time soon.

As the election clock ticks down, Americans realize that if Joe Biden wins the White House, life in America will be  irrevocably changed. They’ve watched as Biden has all but reassured the mob that he’ll take their side.

The rest of law-abiding America realizes that they’ll be sitting ducks — and that a Soros-purchased prosecuting attorney’s office won’t be on the side of justice.

Check out Joe Biden’s anti-gun plan!  He’s openly posted it on his JoeBiden.com:

Regardless of who wins the election, American gun owners can take comfort in knowing that MILLIONS of Americans have joined them in owning guns.

But even if Trump gets reelected, there’s a foreboding sense that we’re only buying time.

It’s time for ‘Average Joe’ gun owners to get involved in state and local politics!  The time to sit back and let other people run our government is over because the anti-gun, anti-American left is on the verge of a total takeover!