New Orleans, LA—The mayor of Champaign, IL made headlines two days ago when she declared a state of emergency which granted her power over….well, everything.  Most notably, she now has the unilateral authority to ban the sale or purchase of firearms.

Except tyrannical Mayor Cantrell not only gave herself the authority to stop the sale of but also the TRANSPORTATION of firearms!  In case that’s unclear, this would nullify concealed and open carry laws currently on the books.

Check it out here: 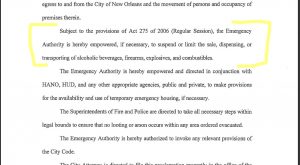 Many states have sections on what is allowed to be granted by a declaration of an emergency.  After all, does a governor declaring a state of emergency or even martial law automatically nullify all other laws?

We don’t think so.  And other states have dealt with this without allowing anarchy in the streets. Too bad Mayor Cantrell isn’t looking for those options.

This is outrageous, but not shocking.  We all know that government is going to government.  Tyrants are going to tyrant.  Whether it’s Republican Governor Mike DeWine in Ohio or Democrat Andrew Cuomo in New York, they’re always looking for an opportunity to expand their power and curtail our rights.

This is why Constitutional Carry is essential for the states that don’t have it yet.  For example, Ohio has closed all sheriffs offices–the only offices that can issue concealed carry permits.  So if you don’t have one already in Ohio, you’re out of luck.  But if they had Constitutional Carry as law, then anybody who met the legal requirements would be able to carry a gun to protect themselves and their families–without ever having to ask permission of a sheriff, fill out paperwork, or pay any fees.

Gun owners know that while there is obviously a health issue here for some Americans, the government’s “cure” is often worse than whatever “disease” they’re trying to heal.

If you’re reading this in an area affected by this overreach like in New Orleans….well, everybody knows what happens to unarmed people at the mercy of their government during an emergency or crises.