Illinois Mayor Declares State of Emergency, May Ban Sale of Guns or Ammunition Due To Corona Virus

Champaign, IL–Mayor Deborah Feinen of Champaign, Illinois had declared a state of emergency is now in effect in the city of nearly 90,000 people. While the city–or even Central Illinois–doesn’t have a single case of the Corona Virus, Mayor Feinen has preemptively declared the state of emergency.  Her office also released a list of possible emergency actions that she is now legally allowed to take.

Here are some of the items that are possible for citizens of Champaign:

If you would like to read the full text of the declaration, you can find it here.

As word spread through Champaign that these options were now on the table, people started to get upset.  Of course, a bureaucrat in a suit tried to calm everybody down by saying that they aren’t necessarily going to do any of those things.

“The executive order allows the city to be flexible to properly respond to the emergency needs of our community. None of the options will necessarily will be implemented but are available in order to protect the welfare and safety of our community if needed,” Jeff Hamilton the City of Champaign’s Communications Manger.

This Isn’t Headed In a Good Direction

Meanwhile, for gun owners, the memory of citizens being disarmed after Hurricane Katrina lingers.  And it’s no secret that often natural disasters and emergencies like this are often used as the impetus to take American citizen’s rights away.

It’s hard to even tell young adults what the world was like before 9-11.  The idea that the government was reading all emails, listening to all phone calls, using an x-ray scanner to see passengers at airports…it would have sounded like a Science Fiction story to anybody in 1990.  But thirty years later, that’s normal daily life in America.

Now, this mayor has essentially declared martial law over her city when there isn’t a single person sick or even suspected of being sick.

Now we’re all in favor of being prepared.  I mean, gun owners carry every day because they–of all people!–know that bad things happen and we should be ready.  But this looks like an anti-gun liberal in Illinois (redundant, we know) who is setting the stage to make things much worse, not better.

Time will tell.  If we lived in Champaign, we’d be getting out of Dodge to go visit Grandma on the farm, that’s for sure. 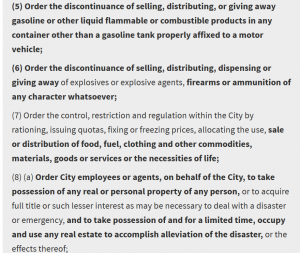