It’s clear that when the chips are down, millions of Americans toss the media hype out the window.  They know there aren’t enough cops to protect every single person if things start to go sideways, so they take steps to protect themselves. They buy guns and ammunition.  Lots of it.

We’ve seen it time after time.  Hurricanes, viruses, tyrannical politicians threatening our rights.  But some folks don’t think that way– and even get angry when they see others preparing to defend themselves.

Case in point: the Moms Demand Action Mommies have their orange panties in a bunch at headlines about recent gun and ammo sales. 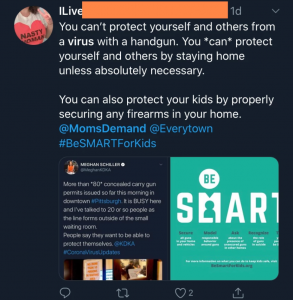 Lady, our kids know a heck of a lot more about guns than you do.  And they know exactly how to handle them safely without being terrified of them–which is more than we can say for you! 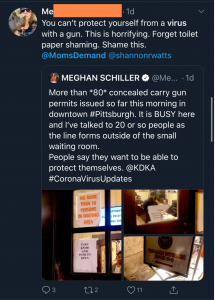 As though the only threat in all of this is the virus itself?  Some people lead truly sheltered lives and have no imagination, either! 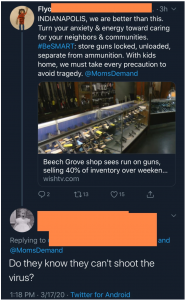 Finally–and this is the icing on the cake–Shannon Watts herself comes on and tries to mom-shame shoppers for buying too much at the grocery store!  You can’t make this up!

Hey Shannon, you might live in a Bloomberg-funded bubble, but the rest of us live in reality.  We’re buying guns because we know that historically, nations who start down this path we’re on don’t come back without mass looting beginning or tyrannical police action starting. Heck, if the power goes out for a few hours, all hell breaks loose in some of these cities.

Nah, Shannon, you try to maintain your normal reality by tweeting on your iphone how much you want to speak to the manager.  We’ll do what we need to do to protect, house and feed ourselves, our families, and our friends and neighbors.