Kentucky: Hundreds of Gun Owners Stand Together at Capital To Be Heard

Frankfort, KY–It’s a sad fact that Virginia Democrats have ignored the rally in Richmond and plunged ahead with their gun control.  But in Kentucky yesterday, gun owners wanted to be sure that their legislators understood that trying to pas gun control was a no-go.

Check out this video:

'Walking into the state capitol completely blew my mind. I'm armed, they trust us. A complete stranger, walked in, (they're like) cool. They trust us' says #2A supporter Christoper Jankoski as friends raised their guns outside the #Kentucky Senate chamber. https://t.co/b3x4cInGc8 pic.twitter.com/sFaij08Yz2

Certainly a different tone to Nervous Northam, that’s for sure.

This rally drew about 200 gun owners, though pictures imply there could have been as many as 250 or 300.  And this isn’t the first rally that Kentucky has held.  Since the mess began in next-door Virginia, Kentucky has held two other similar rallies that were equally peaceful. Their goal: making sure that Kentucky legislators don’t forget that Kentucky is not Virginia.

The images are just plain fun to see: 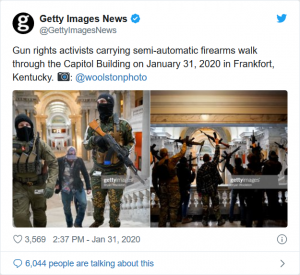 Representative Thomas Massie, who we have praised before for his stance on the Second Amendment was happy to be in attendance. 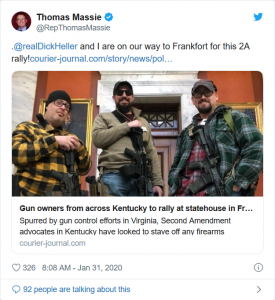 Representative Massie was even open carrying a long rifle at the event: 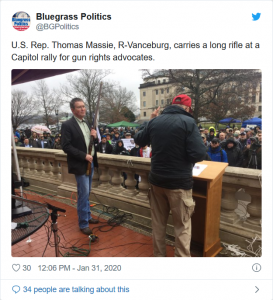 The local media didn’t know what to make of the event.  They couldn’t argue with the fact that the crowd was peaceful and within their rights. 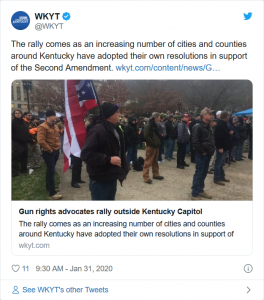 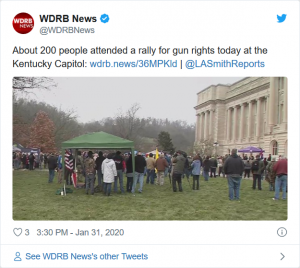 A Taste Of Their Own Medicine

Meanwhile, open carry is allowed in Kentucky’s capital building, so the security staff basically looked the other way while dozens and dozens  of guns streamed into the building.

In fact, security guards were overheard saying, “You can step around the metal detector. No need to screen you. You’re free to go anywhere, except the Supreme Court. Enjoy your visit.”

One liberal newspaper was whining about how those with guns were allowed to skip the security line but those without guns still had to go through standard protocol.  Cry us a river.

We’ll admit it:  we love these pictures.  We can’t help it.  But we know that–even huge events like Richmond’s–rallies don’t do much to deter leftist politicians intent on passing gun control.  And rallies don’t stop cowardly sellout Republicans from cutting deals anytime they think they’ll get away with it.

We may rally for the fun and camaraderie of it, but we bring the pressure on our legislators year round.  You know that Bloomberg and his crew aren’t only doing things on their anti-gun lobby day.

You know that the inevitable pull to the Left practically floats in the air in every state Capital.