Gun owners across the country have been on edge since January 20th, wondering when the gun control hammer would drop from Joe Biden’s White House.

It looks like that time has come, as just this morning news was released that Democrat Congressman Mike Thompson of California has refiled Nancy Pelosi’s favorite nasty gun control bill from last session, H.R. 8.

This Universal Background Check bill passed the Democrat controlled house under President Trump but was stopped by the Republican Senate.

Now, of course, that protection is long gone.

This bill, H.R. 8, is the foundation for any other federal gun control that Biden and his socialist, America-hating friends may want to pass later.  After all, without the national database that H.R. 8 would provide them, how would they know who needs to comply with any other new laws?

It’s no exaggeration to say that H.R. 8 is the first step to nationwide gun confiscation — a step that the left has never achieved before!

This bill brings name recognition and momentum from it’s previous run during the 2019/2020 legislative session.  Because this bill is a hold-over from that time, it already has the endorsement of Everytown for Gun Safety, Giffords, Brady, Sandy Hook and more gun control organizations.

Some of those organizations have already sent out emails to THEIR members this morning, urging them to contact their legislators and tell them to pass this bill! The left is waking up their grassroots machine — which means it’s time for gun owners to get to work!

But before we move on to what gun owners can do to stop this bill, we have to point out that this awful H.R. 8 already has several original cosponsors, including Democrats Sheila Jackson Lee — the Representative who filed H.R. 127 earlier this years — as well as Robin Kelly, IL, Lucy McBath, GA and Jerrold Nadler, NY.

But worse than those four Democrats is that the bill already has three Republican cosponsors! 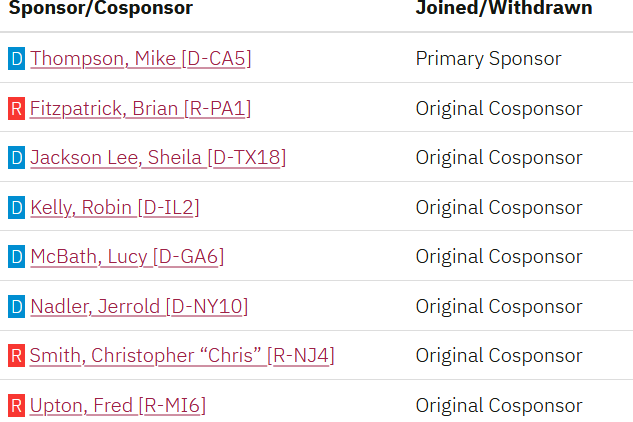 Gun owners, this bill is THE bill that we’ve been waiting for!

It’s no secret that Nancy Pelosi was a huge fan of H.R. 8 — she even mentioned it on the February 14th anniversary of the Parkland shooting when she was promising the left that Congress would pass gun control!

It’s time for gun owners to get involved in stopping the radical left’s nasty gun control — starting with H.R. 8!  Please take thirty seconds to fill out this petition, provided to us by the American Firearms Association!  They will send it DIRECTLY to your federal legislators, telling them to VOTE NO on H.R. 8!