Novi, MI — One Michigan ammunition manufacturing company is putting their money where their mouth is and gun owners love it.

Fenix Ammunition, located in the small town of Novi, MI recently inserted a checkbox on their online checkout page asking customers to verify that they did NOT vote for Joe Biden in the recent presidential election.

The company apparently has a hard time putting up with tyranny, as they already went viral last year for a sign on their front door telling customers NOT to wear a mask. And with Governor Gretchen Whitmer in charge of their state, the last thing they want is more new federal gun control regulations.

Check out the box they added for their customers: 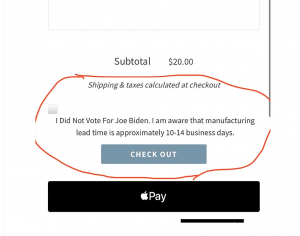 Of course, a few gun owners on the left went apoplectic, ranting and raving that this wasn’t nice and how dare they and blah blah blah.

The same crowd that screeched all year in 2020 how private businesses were allowed to pass whatever restrictions they wanted in their own business, shockingly doesn’t like when companies on the right play by those same rules!

That argument wasn’t going to fly with Fenix Ammunition. In a Twitter thread, the company responded with this roast:

“We’ve had a few potential customers call this morning to ask why they have to check a box stating they did not vote for Joe Biden in order to purchase our ammunition.

First question – are we serious?
Yes, we are serious. Joe Biden ran on a campaign built on the most radical gun control platform a major party candidate has ever had, including banning the online sale of ammunition. Essentially, a plan to bankrupt our company.
Second question – couldn’t I have voted for him for other reasons?
Sure, that’s possible, but if you did, you should immediately sell any firearms you own out of solidarity.
Third question – are you really willing to walk away from a paying customer simply because they voted for Joe Biden?
Yes, yes we are. We’re dead serious.
We don’t want your money, and you shouldn’t want us to have it because we’re going to use it to make more ammo, sell it to the citizenry, and do everything in our power to prevent Joe Biden’s administration from usurping the rights of Americans.
We have no problem talking to Biden voters and educating them on what they did, but they have to be willing to acknowledge their ignorance at the very least. We’re not going to sit here and debate with you.
We’re a 2A company and these are our first principles.

They also issued a statement on why Joe Biden is no friend to gun owners which our readers can find here.  Some gun owners who hold to the ideology of the radical left cry that it’s not fair that they be marginalized in the ‘gun community.’ 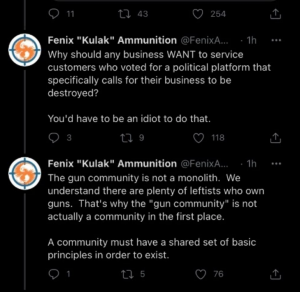 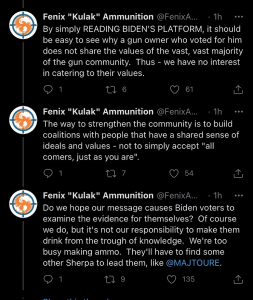 Just in case there was one single America-loving patriot in the country who wasn’t already convinced to order from Fenix, we saw this post on their Facebook page that was posted on January 6th:

An ammunition company that wants to get ammo into the hands of the people….how very American.