WATCH: Hundreds Of Troops Turn Their Backs On Biden’s Motorcade After 5K Troops Made To Sleep In Parking Garage — TRUMP Offers Them Trump Tower

The new administration was happy to stage a photo op with thousands of troops laying in the Capitol building.  We imagine it helped to bolster the idea that Joe Biden still faced some great threat from the long-dispersed crowd who attended then-President Trump’s rally on January 6th.

Headlines splashed all over the Fake News media as politicians and media working in the Capitol made much about how the area felt like a war zone due to the thousands of soldiers sleping in the marble hallways and stairwells.  (We’ll ignore how out of touch that sounds to those brave members of our military who took fire in real war zones.)

But once the photo op and the inauguration were over, five thousands of those troops were ushered out of the Capitol building and into a nearby parking garage.

According to reports, all five thousand troops shared one single bathroom with two toilets. There was only one single power outlet for them, as well.

One Guardsman told Politico that on the day of the inauguration dozens of lawmakers had taken photos with them, shook their hands, and thanked them for their service. He added, “Within 24 hours, they had no further use for us and banished us to the corner of a parking garage. We feel incredibly betrayed.” 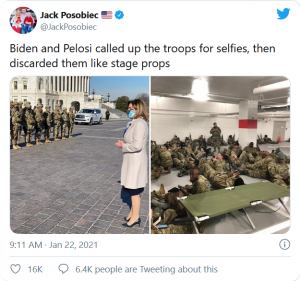 Needless to say, the troops weren’t feeling the love, and made that clear in this clip.  The clip was posted on YouTube with the claim that these troops were turning their backs on Joe Biden’s motorcade.

The link is here, while it’s still active. Meanwhile, we’ve embedded it, since this video is the type that disappears at the hands of Big Tech.

Trump Wins In The Hearts And Minds Of Americans

Former President Trump heard about what Joe Biden’s Capitol Police had done to the troops and promptly offered up his own Trump Tower for them.

SCOOP: Trump has given permission for the troops to stay at Trump Hotel DC if any of them need, per advisor @OANN

According to one article, this compassionate act by former President Trump has endeared him to many:

Enter former President Trump who has now offered his Trump Hotel D.C. to the National Guardsmen so they will have a comfortable place to stay and rest. Even after leaving office, he has not forgotten those who serve this nation. Many found the gesture to be very touching and selfless, not to mention patriotic.