Dayton, NV — Federal agents raided one of the country’s largest ‘ghost gun’ part manufacturers on Thursday, in a ‘show of force’ against kits that allow people to make weapons at home.

According to the application for the search warrant that was unsealed just hours after yesterday’s raid, the ATF agents were investigating the company for “illegally manufacturing and distributing firearms, failing to pay taxes, shipping guns across state lines and failing to conduct background investigations.”

The probe focuses on Polymer80’s “Buy Build Shoot Kit,” which includes the parts to build a “ghost” handgun. The kit, which Polymer80 sells online, meets the definition of a firearm, ATF investigators determined according to the warrant application. That means it would have to be stamped with a serial number and couldn’t be sold to consumers who haven’t first passed a background check.

Of course, that’s a huge over-statement, implying that Polymer80 was wantonly disobeying the law in making their BBS kits.   The article doesn’t mention that the kits have been sold legally for years.

In reality, Polymer80’s BBS kits have been on the market for years specifically because they don’t meet the ATF’s definition of a gun.  That is, their kits cannot be readily assembled into a firearm out of the box.

Instead, the frame has to be finished with tools by the purchaser.  And of course, building a personal firearm without serializing it is entirely legal.

The Wall Street Journal Is Banking On Non-Gun Owning Readers

How dumb does the Wall Street Journal think gun owners — and gun manufacturers — are?   Companies like Polymer80 intentionally and carefully engineer products that take advantage of federal laws and definitions as they stand!

What company would go into business, hire staff, start marketing themselves, etc all while selling an illegal product? Nobody.

It isn’t the fault of the consumer or manufacturer that the law is poorly written, devices are poorly defined, or that arbitrary rules can be engineered within to deliver the product someone wants.

But the WSJ article continued in the same insane direction:

Thursday’s raid is the most significant action against a ghost-gun company to date, according to the law-enforcement officials, and suggests the federal government is scrutinizing the growing industry. Homemade ghost guns have grown in popularity in recent years and can’t be traced in criminal investigations because they lack serial numbers. Law-enforcement officials say they appeal to people who can’t pass background checks. When people buy fully made guns from dealers, the weapons have serial numbers and purchasers must go through a background check.

The ATF is now saying an unfinished frame without a serial number is a firearm when before it was not.  Worse, they are now demanding serial numbers and back taxes on ‘firearms sales’ that never happened because no firearms were sold or manufactured!

Less than an hour ago, Polymer80 made an announcement on their Facebook page: 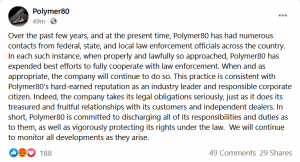 That is, ‘We didn’t do anything wrong but we can’t say anything else right now.’

No employees were arrested and no charges have been filed at this time.  We’ll keep you posted if that changes.

As a note, there’s a long-standing idea in the gun world that the ATF often “grandstands” right before a new president comes into office, making a big play that’s in keeping with the incoming President’s ideas on gun control.

In this way, they ensure continued funding, removing some of the risk that the incoming President will cut their funding as ‘punishment’ for enforcing the policies of the previous administration — who likely didn’t share the same ideas on gun controls.

Basically, the ATF director might be afraid that if he looks soft on guns, Joe Biden will dismiss him or other top ATF staff if he takes office in January.

That would also explain the ATF’s insane reversal on braces in the October fiasco over the  Honey Badger.  That was another case where the ATF changed their definition of a brace, unilaterally making a previously legal gun accessory illegal overnight.  Recall that in October, the left was busy pushing the “Joe Biden has it in the bag” routine.

Of course, their grandstanding for Biden only works if Biden takes the White House, but it’s enraging that it happened at all.