Just two days before the general election on Tuesday, Former Vice President Joe Biden took to his Twitter page to promise his supporters that gun control will be a big part of his agenda if he wins the election. 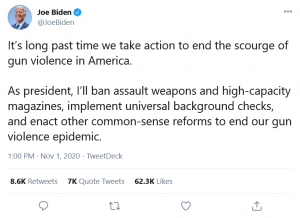 This isn’t a last ditch effort to grab anti-gun votes with no intention to follow through.  Joe Biden has proudly proclaimed his intention to pass gun control since his first day on the campaign trail.

Not only does Biden want to ban any future manufacturing of more AR-15s, but he would force every AR-15 to be registered under the National Firearms Act of 1934.  As it stands, that would simultaneously levy a $200 federal tax on every single AR-15 currently owned by Americans.

According to most “low” estimates, the number of AR015s that American gun owners currently posses is around 18 million.

Do the math on $200 times 18 million and the federal government would be collecting $3.6 BILLION dollars in extra taxes from AR-15 owners alone.

If that’s not bad enough, Biden’s stated plan to force American gun owners to register their ‘high capacity’ magazines under the National Firearms Act, as well.

This means that, as it stands, American gun owners would ALSO have to pay $200 per high-capacity magazine they own.

A gun owner that owns two AR-15s with two high-capacity magazines for each gun would be forced to pay $1,200 in new taxes on items he’s already legally bought and paid for!

And it’s not just AR-15 magazines that would be affected. ANY ‘high-capacity’ magazine would fall into this category.

What does the future hold for America’s law-abiding gun owners?  New Zealand has already discovered that mass gun confiscation follows actions like these.

The left’s vision of America grows uglier by the moment.