While the left crows about the media’s appointment of Joe Biden to the presidency, gun owners might feel a bit despondent over the situation at hand.

But one reason for optimism is the fact that 2020 has dealt a crushing blow to the arguments of anti-gun organizations across the country.  This fateful year has made it clear that the relentless anti-gun propaganda in the news and entertainment failed to convince millions of Americans that guns are always bad.

In fact, the latest numbers from the NSSF reinforce that 2020 has been a watershed for gun owners.  The month of October saw more NICS background checks ran than any other October on record.  Additionally, this is the tenth month in a row that gun sales have blown previous records out of the water. 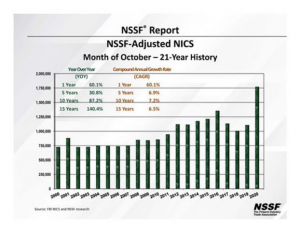 Additionally, a single NICS check allows one person to buy multiple guns in one transaction.  It also does not take into account any private sales.

Estimates for the number of ‘first time gun owners’ vary, but the NSSF believes the number to be around 7 million.  There is no official record kept of ‘new gun owners’, but there is no doubt in anybody’s mind that this is a record breaking number, as well.

Mark Oliva, Director of Public Affairs for the NSSF commented on the staggering growth:

“Americans of all political persuasions are exercising their Second Amendment right to keep and bear arms and doing so in record numbers. This hasn’t been a phenomenon of just red states, but also blue states. Never before have so many Americans chosen to exercise their right to firearm ownership, including the estimated 6.9 million who purchased a firearm for the first time this year. Additionally, this has been a sustained period of firearm sales since March. This is clearly not a one-off event.”

The left has spent decades telling Americans that only “angry, old white racists” own guns.  And many Americans bought the propaganda because they feel the need to own a gun.

But 2020 brought a whole new set of problems that most Americans hadn’t contemplated before.  Massive social unrest, rioting, looting, the potential for food scarcity as empty grocery store shelves were seen nationwide, and worst of all, the defunding of police.

If the cops aren’t coming, Americans want a gun.  It’s as simple as that.  Millions of Americans realized that there are half a dozen good reasons for ANY American to have a gun!

Because of that, the left’s propaganda points might be a hard sell in 2021.  Seven million new gun owners won’t appreciate being called angry, old white racists — especially since the demographics of new gun owners prove that to be a lie once and for all.