“Twitter routinely restricts posts expressing conservative views, even from a President of the United States, while at the same time it allows Iran’s supreme leader to freely spew vile, anti-Semitic hate and even death threats. Every year, countless Americans are banned, blacklisted and silenced through arbitrary or malicious enforcement of ever-shifting rules.”

But conservatives would be shocked to learn that the radical, vocal left is angry at Facebook for not censoring conservative voices enough — or removing them from their platforms entirely!

Case in point: the longtime girlfriend of Anthony Huber is suing a local Kenosha militia group, Kyle Rittenhouse and FACEBOOK for the death of her boyfriend.  Er…life partner, as she called him.

For those who can’t keep the Kenosha felons straight, Huber was the 26-year-old man attacking 17-year-old Kyle Rittenhouse with a skateboard seconds before Kyle defended himself.

Huber had previous convictions for domestic violence including strangulation, suffocation, assault with a deadly weapon and more.  Your average ‘hero stuff,’ of course. 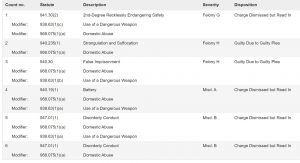 The five-count civil complaint filed late Tuesday in a Wisconsin federal court argues that Facebook “empowered right wing militias to inflict extreme violence and deprive Plaintiffs and protestors of their rights” by providing a platform for the groups to recruit members and plan violence. It also accuses alleged shooter Kyle Rittenhouse, a follower of the fringe anti-government group “boogaloo,” and the “commander” of the self-described militia group Kenosha Guard of being part of a violent conspiracy to violate the constitutional rights of four Black Lives Matter protesters, including the partner of a man killed during the protests.”  — Emphasis added by S.A.D.

They’re not kidding!  While Antifa openly uses twitter hashtags to move their members in these cities, giving their followers directions and instructions, the left wants Facebook to silence anybody they don’t like.

The four plaintiff’s lawyer, Jason Flores-Williams, went on to say, “There is a failure on the part of Facebook to act based upon warnings that result[ed] in armed militias violating state law and in the case of Rittenhouse going to a peaceful protest to violently repress and deter American citizens from engaging in their constitutional rights.”

What does the group want?  Money, of course.  They’re all emotionally traumatized!

Now, the business owners in downtown Kenosha who have lost everything could argue that they’ve been traumatized and they’d have a solid case.  But when you’ve dressed up in military garb, driven yourselves to a violent and destructive protest, and one of your friends attacked a teenage boy, it’s going to be a hard sell that you’re the victim of trauma.

The lawsuit seeks money, but also an injunction against Facebook prohibiting the company “from violating its own policies that are supposed to prevent violent rhetoric, militia groups, and other racially motivated hate groups from congregating and interacting on its site.”

The Implications Are Huge

There’s something more sinister here than might be obvious.  The left is bringing a LOT of pressure to bear on Facebook to silence — that is, DELETE — all pages, accounts, business pages, and etc of people who could even remotely be construed as ‘promoting violence.’

And this case is far from the only pressure Facebook is getting.

On Wednesday, September 16th, more than a dozen celebrities went silent on their Instagram pages in an attempt to ‘send a message’ to Facebook.

More than a dozen celebrities including Kim Kardashian West, Katy Perry, Michael B. Jordan and Ashton Kutcher said they will participate in a 24-hour Instagram “freeze” on Wednesday as part of the “Stop Hate For Profit” movement “in protest of Facebook’s repeated failures to address hate speech and election disinformation on their platforms.”

…Specifically, the organization wants Facebook to remove Facebook Groups that promote white supremacy, hate and violent conspiracies; forbid any event page with a call to arms and eliminate a politician exemption for political and voting content, among other requests.

Also joining the dog pile was big-dollar advertisers Coca-Cola, Starbucks, and Verizon, who stopped all ads with the social media giant for the entire month of July.

Follow any pro-gun pages on Facebook?  They’d be gone.  Pro-gun Instagram accounts?  All removed, not just de-monetized.  You and some former military buddies hang out in a private Facebook group talking about the old days?  Gone.

They want to silence the millions of Americans who don’t think like them.  And this girlfriend is just piling on more pressure.