Jefferson City, MO — State Senator Eric Burlison is a pro-gun rock star from Missouri.  Burlison was the lead sponsor for the Constitutional Carry legislation that went on to become law in Missouri in 2016.  Since then, Burlison has continued to be the leading voice for gun owners in the Senate since his return in 2019.   He’s currently the lead sponsor for the Second Amendment Preservation Act (SB-588) and legislation to end deadly ‘Gun Free Zones’ (SB-663) in Missouri.

Simply put, he’s the best a gun owner can hope for when it comes to defending their gun rights.

Burlison recently published the following letter, thanking a grassroots gun rights group, the Missouri Firearms Coalition, for their work for the Second Amendment.

We’ve included it in it’s entirety.

Having been elected to the legislature in Missouri for a decade, I know that the phrase ‘Victory has a thousand fathers, while failure is an orphan’ is very accurate int he public policy arena.  When major legislation becomes law, everyone likes to stick their hand up to claim sole credit for its passage.

The truth is that passing significant legislation is usually a joint effort between a bill’s primary sponsor and supportive organizations that rally their members into encouraging lawmakers to support the bill.  This is the way things are supposed to work.  After all, as legislators, my colleagues and I are simply the people’s voice in Jefferson City and we react when we get calls and emails from our district, urging our support (or opposition) to legislation that is before us.

And when it comes to the fight for gun rights here in Missouri, few fight harder in Jefferson City for the Second Amendment than the members of the Missouri Firearms Coalition (MOFC.) In the wake of the August primaries, I’ve seen plenty of attacks leveled against MOFC members and against its Political Director, Aaron Dorr.

Aaron has been attacked for being mean, for being too aggressive as he goes after anti-gun legislators at election time, and attacked because he and his brothers work in multiple states fighting to defend the Second Amendment.

The truth is that ‘The Dorr Brothers,’ as the media refers to them, are incredibly effective at advancing or defeating legislation at the state level because they don’t care what leftists or moderates think about them. This has led to significant advancements for gun owners here in Missouri.

In 2015, Aaron Dorr reached out to me and asked for a meeting. He explained that the newly formed Missouri Firearms Coalition wanted to join my long fight for Constitutional Carry legislation in 2016. Having previously sponsored this bill on my own, I was happy to file the legislation again, but this time with the small hope, that we would have the grassroots support organized to pass the bill in just one year, my last year in the house.

But I had no idea how much firepower would be coming from the members of the Missouri Firearms Coalition! Within days of the 2016 legislative session kicking off, my fellow members in the House began receiving emails from gun owners in our district, urging passage of my Constitutional Carry legislation.

This didn’t let up all session.

Throughout the committee process, the multiple floor votes, and the fight for the bill over in the Senate, the ‘Dorr Brothers’ used a direct mail campaign along with email and social media to drive this bill forward. Once the  legislature realized that this bill was going to pass, Aaron and I decided that with so much grassroots pressure backing this bill, we could pass more than just Constitutional Carry.

As gun owners know, we were able to strengthen the bill up with Stand-Your-Ground law, expanded Castle Doctrine legislation, lifetime carry permits and more. 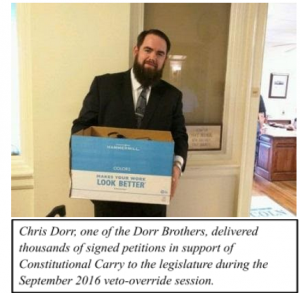 All of these bills became law in 2016, as amendments to our original Constitutional Carry bill. On the final day of the 2016 session, we finally passed this legislation, only to then have former Governor Jay Nixon veto it, disappointing Missouri’s gun owners.

But MOFC and the Dorr Brothers didn’t give up. Rather, they spent the summer working to gather petitions from tens of thousands of Missourians, urging the legislature to override Nixon’s veto. In the days leading up to the ‘Veto Override Session’ in September of that year, several moderate Republicans began to publicly announce their intentions to oppose this bill.

Plenty of other organizations would simply refuse to put pressure on Republicans, no matter what. That wasn’t the case with MOFC. They poured calls in to these waffling legislators offices using a combination of robo calls, smart social media work and email – and we went on to override Governor Nixon’s veto of what became the largest gun rights bill in Missouri history!

A significant bill like this involved many individuals and organizations, but without the Missouri Firearms Coalition this bill would have never passed. What’s more, the Dorr Brothers could have walked away at that point. But, if anything, they’ve dug in even deeper here in Missouri, leading the fight for gun rights for the last five years in
Jefferson City. 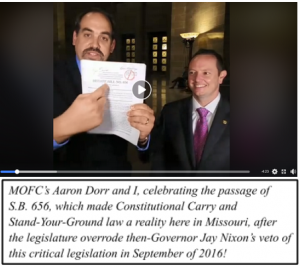 For example, the Second Amendment Preservation Act (known as SAPA) has been batted about for years in Missouri. But when MOFC got behind this bill in 2020, it picked up almost 90 cosponsors, as legislators were flooded with constituent emails, urging their support of this bill. This bill did not pass in 2020 as the Covid-19 situation basically cancelled the last half of the session, but clearly this legislation has massive support now that MOFC is pushing for it.

If anything, based on the results of the 2020 primary elections, it would appear that the Dorr Brothers thoroughly enjoy exposing legislators who won’t support the Second Amendment. During the lead up to the August primaries here in Missouri, MOFC blitzed the state with a range of digital ads, radio and TV ads, and their ‘Whiteboard Videos’ that highlighted the records of various incumbents and would-be legislators.

You can still see them on MOFC’s Facebook page and YouTube channel.  Hundreds of thousands of Missourians saw these spots, and they clearly didn’t like what they saw, as virtually every legislator that MOFC exposed lost their primary last month.

And for that reason, for being devastatingly effective, the Dorr Brothers are being attacked by defeated politicians and now, national media outlets like NPR and others. But if President Trump has taught us anything, it’s that radical leftists and their friends in the media will do and say anything as they try to silence anyone who fights for freedom.

When the left runs across an enemy that won’t back down, they get angry. But when they find an enemy that not only won’t back down but attacks back, they melt down!  And that’s exactly why the left and their friends in the media are lashing out at the Missouri Firearms Coalition and the Dorr Brothers.

The Endorsement Of A Warrior Counts For Something

High praise for the Dorr Brothers, from Missouri’s leading voice for Second Amendment freedom! To get involved in the fight for gun rights in Missouri, go to www.MissouriFirearmsCoalition.org.