Denison, IA — Republican House Representative Steve Holt made a post on Facebook about an hour ago that needs to go viral.

It’s so good, we’re sharing it in it’s entirety — and it’s a long one, so that’s saying something.  We’ve copied the text below each screenshot for easier reading. 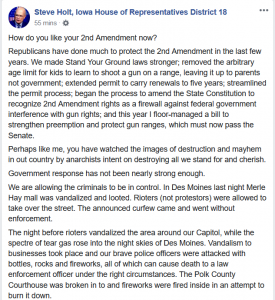 Republicans have done much to protect the 2nd Amendment in the last few years. We made Stand Your Ground laws stronger; removed the arbitrary age limit for kids to learn to shoot a gun on a range, leaving it up to parents not government; extended permit to carry renewals to five years; streamlined the permit process; began the process to amend the State Constitution to recognize 2nd Amendment rights as a firewall against federal government interference with gun rights; and this year I floor-managed a bill to strengthen preemption and protect gun ranges, which must now pass the Senate.

Perhaps like me, you have watched the images of destruction and mayhem in out country by anarchists intent on destroying all we stand for and cherish.

Government response has not been nearly strong enough.

We are allowing the criminals to be in control. In Des Moines last night Merle Hay mall was vandalized and looted. Rioters (not protestors) were allowed to take over the street. The announced curfew came and went without enforcement.

The night before rioters vandalized the area around our Capitol, while the spectre of tear gas rose into the night skies of Des Moines. Vandalism to businesses took place and our brave police officers were attacked with bottles, rocks and fireworks, all of which can cause death to a law enforcement officer under the right circumstances. The Polk County Courthouse was broken in to and fireworks were fired inside in an attempt to burn it down. 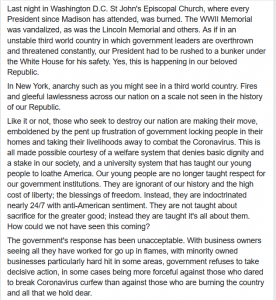 Last night in Washington D.C. St John’s Episcopal Church, where every President since Madison has attended, was burned. The WWII Memorial was vandalized, as was the Lincoln Memorial and others. As if in an unstable third world country in which government leaders are overthrown and threatened constantly, our President had to be rushed to a bunker under the White House for his safety. Yes, this is happening in our beloved Republic.

In New York, anarchy such as you might see in a third world country. Fires and gleeful lawlessness across our nation on a scale not seen in the history of our Republic.

Like it or not, those who seek to destroy our nation are making their move, emboldened by the pent up frustration of government locking people in their homes and taking their livelihoods away to combat the Coronavirus. This is all made possible courtesy of a welfare system that denies basic dignity and a stake in our society, and a university system that has taught our young people to loathe America. Our young people are no longer taught respect for our government institutions. They are ignorant of our history and the high cost of liberty; the blessings of freedom. Instead, they are indoctrinated nearly 24/7 with anti-American sentiment. They are not taught about sacrifice for the greater good; instead they are taught it’s all about them.

How could we not have seen this coming?

The government’s response has been unacceptable. With business owners seeing all they have worked for go up in flames, with minority owned businesses particularly hard hit in some areas, government refuses to take decisive action, in some cases being more forceful against those who dared to break Coronavirus curfew than against those who are burning the country and all that we hold dear. 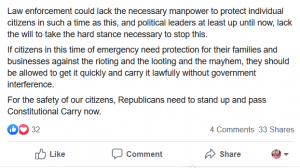 Law enforcement could lack the necessary manpower to protect individual citizens in such a time as this, and political leaders at least up until now, lack the will to take the hard stance necessary to stop this.

If citizens in this time of emergency need protection for their families and businesses against the rioting and the looting and the mayhem, they should be allowed to get it quickly and carry it lawfully without government interference.

For the safety of our citizens, Republicans need to stand up and pass Constitutional Carry now.

Steve Holt is a Marine Corps veteran.  He is also the Iowa House Judiciary Committee Chairman.  He’s not some political pushover who just showed up to make political hay out of current events.

In fact, the word on the political street in Iowa is that Steve Holt is one tough sumbish.  One politico we talked to even called him a “hard ass.”

And that’s because Holt is dead on and isn’t backing down on Iowans gun rights.  While so many in the country are afraid and want to disarm everybody, Holt has the right answer!  This is the EXACT response that we should be seeing from Republicans and pro-gun Democrats across the country.

Stand Your Ground and Constitutional Carry should be the bare minimum gun owners will accept.

Share this article with your legislators and tell them to man up and join Steve Holt in calling for Constitutional Carry in YOUR state NOW.