Seattle, WA — Antifa has set up an ‘autonomous zone’ in the middle of downtown Seattle which covers about six square blocks of the downtown area.  They have kicked out all the police, overrun the police precincts, and put blockades in the street to keep vehicles from entering.

In this ‘autonomous zone,’ they aren’t recognizing American law, and have essentially declared themselves their own country.  Inside the United States.

Check out this tweet, where reporter Andy Ngo broke the story:

Seattle @MayorJenny is allowing a dangerous situation to fester. #Antifa militants have taken over & created an “autonomous zone” in city w/their own rules. Police precinct abandoned. Antifa set up barricades to create a border. Calling for volunteers to provide armed guard. pic.twitter.com/ksQI4NI5kP

Check out these images:

They’ve built their own borders and perimeters inside the city –how ironic!

This is a map of the area of Downtown Seattle that is currently under Antifa’s control.

While the media screeches that Antifa is not a dangerous or violent group of people, Antifa keeps proving them wrong.   The “Free Capital” autonomous zone has ejected the police and is now charging local businesses for protection from the rioting looters.

And Seattle’s police aren’t stopping it.

Seattle’s Assistant Police Chief Deanna Nollette said yesterday, “We have been hearing from community members that they have been subjected to barricades set up by the protesters with some armed individuals running them as checkpoints into the neighborhood.”

THIS is what happens when you disband the police entirely.  Society doesn’t just adjust to not having law and order.  No, thugs and criminals fill the void.

Meanwhile, on the streets of Seattle’s “Free Capital” zone, the citizens are seeing the America that the left wants for all of us.

The Police Precinct was overrun by rioting looters.  It’s now boarded up in hopes that Antifa’s thugs won’t burn it to the ground.  Assistant Police Chief Nollette said there were threats to burn down the East Precinct before the Seattle Police Department left on Monday.

“We felt the safest plan at the time was to secure the building and have our offers relocated,” Nollette said. “We would like to be able to return to the East Precinct to our normal operations. This would improve our response times and capabilities within the neighborhood.”

Welcome To The Left’s Future For America

In only two days, Antifa ran out of food and put out the call for help. 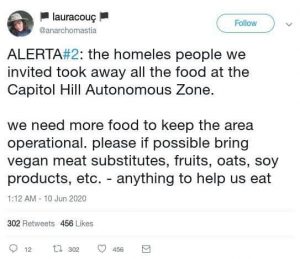