Minneapolis, MN —  The leftists’ propaganda machine wants to fool Americans into thinking that they care about people.  That’s why they take away scary guns, and restrict freedoms — they just love people!

Here’s another example of their stupidity:  the Minneapolis City Council is going to consider dismantling the Minneapolis police department.  Three city council members have already tweeted their support of the idea.

City Council member Steve Fletcher –whose Ward 3 covers part of the downtown area– said, “I think we’ve had a vision for a while of wanting to see another kind of city response to those [911] calls.”

Just hours later, another City Council Member Phillipe Cunningham retweeted it, adding that the number of complaints about police usually went down after budget cuts.

Then Jeremiah Ellison, council member for Ward 5 chimed in: 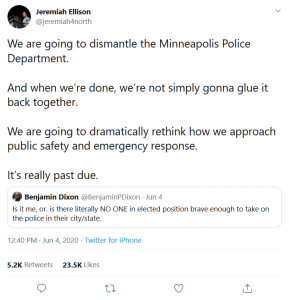 Councilman Fletcher went on to say that “most” of the council was discussing this possibility. On another Twitter thread filled with the most inane leftist comments, Fletcher said, “Several of us on the council are working on finding out what it would take to disband the Minneapolis Police Department and start fresh with a community-oriented, nonviolent public safety and outreach capacity,”

When asked what that would look like, Fletcher didn’t give specifics.  He did say that it would take some time to phase the police department out and could also involve a public vote in the future.

The entire city council signed a letter last week voicing their support for the Minnesota Department of Human Rights’ incoming investigation into the police department.

Anti-gun leftists have long said that citizens don’t need to carry guns — they only need to call the police!  But now the left is essentially calling the very existence of police ‘racist.’

They don’t address that — like Chicago, Detroit, Atlanta and other Democrat stronghold cities — Minneapolis has been under Democrat leadership for years.

Anything they’re looking at today, they did to themselves.

So what is it?  Is it “Only cops need guns!” or is it “Everyone can protect themselves because we don’t need the police!”

More likely than not, this will come down to some fairy-tale leftist idea that with enough hugs and unicorn dust, everybody will magically turn into a good person and stop committing crimes!

If you own property in the city limits of Minneapolis, you might wanna get that on the market as fast as you can.