Lowell, MI  — The anti-gun, anti-American left works hard to silence all dissent.  And since former Police Chief Steven Bukala of Lowell, Michigan, challenged the left’s narrative, he will be shown no mercy.

Sheriff Bukala posted on the Sheriff’s department Facebook page on June 2nd to inform residents that there were four young men with guns who were legally walking the main streets of town.  The post said, “We at the Lowell Police Department support the legally armed citizen and the Second Amendment,” the chief wrote on the department’s Facebook page. 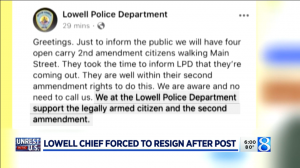 He then posted this image on his personal Facebook page:

On that personal post he wrote, “So these fine young men called me today. They wanted to exercise their Second Amendment rights and walk down Main Street. They saw what happened in Grand Rapids. They said it’s not going to happen here. We have your backs. I thanked them for letting me know they were in town and to call if they see

But the City Manager, Michael Burns — who has refused to go on camera despite numerous requests — had appointed himself the Chief of the Political Correctness Police and told the sheriff to retract his public statements. 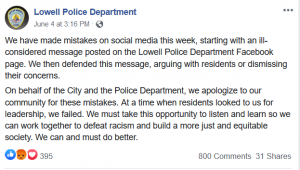 We have made mistakes on social media this week, starting with an ill-considered message posted on the Lowell Police Department Facebook page. We then defended this message, arguing with residents or dismissing their concerns.

On behalf of the City and the Police Department, we apologize to our community for these mistakes. At a time when residents looked to us for leadership, we failed. We must take this opportunity to listen and learn so we can work together to defeat racism and build a more just and equitable society. We can and must do better. 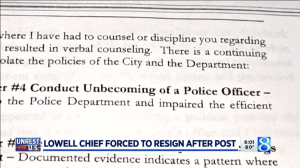 The pathetic city manager Burns went on to tell Chief Bukala that he could resign by 5 p.m. Thursday, June 4th or be terminated at 5:01 p.m. 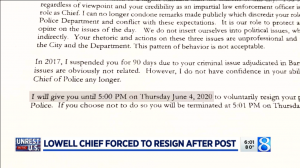 Chief Bukala had been employed as a police officer since 1995.  He was appointed Police Chief in 2013.  Last year he received a medal of valor for saving a drowning women.

The Left Plays For Keeps

He merely affirmed his support of the Second Amendment and young men who care about their community.

Far from being trouble makers, those young men had even gone so far as to notify police so that no officers would be alarmed if they saw them.

This sheriff did nothing illegal.  He just offended the gods of the left.  Remember, Michigan’s leftist government has a major Public Relations problem, thanks to Gretchen Whitmer and the rest of her Covid Crones.

But instead of being humble and learning from their mistakes, leftists like the city manager of Lowell are just doubling down on their attacks.

They hate the Second Amendment, free speech, and anybody who isn’t fully supportive of the rioting maniacs who are burning American cities to the ground.

As word gets out in the law enforcement community what happens to good, decent men like Chief Bukala, more of the good cops are going to quit.

And that’s when an armed citizen had better be in a state with rock solid Stand Your Ground laws and Constitutional Carry already on the books.