Much of the nation cheered yesterday when President Trump announced that he was categorizing Antifa as a terrorist organization.

The leftists radicals were identified by Attorney General Barr as being instigators in the initial rioting in Minneapolis in the last few days.  In fact, National Security Advisor Robert O’Brien said on a CNN interview on Sunday that the violence in Minneapolis “is being driven by antifa.”

Rubio Tries To Play To The Crowd

While the hard left is squealing at being called out, Florida Senator Marco Rubio saw an opportunity to hopefully pander to the middle ground.  After all, without a spine, the middle ground is all he has to work with.

Rubio took to Twitter to paint the violence as equally that of antifa and ‘boogaloo’ groups. 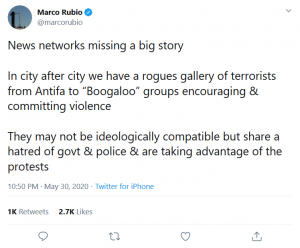 Marxo Rubio pretends that the right is behind the violence in these cities. While we have no doubt that there are outside instigators, it’s laughable to think it’s the right.

Since many of the folks commenting on his thread had never heard of ‘boogaloo’ groups, he felt the need to explain what they were.

“They may not be ideologically compatible but share a hatred of govt & police & are taking advantage of the protests,” Rubio.   Red-Flag Rubio, who is the acting chair of the Senate Intelligence Committee, is saying this without any evidence to back up his statements.

Painting With Too Broad A Brush

Violence and social instability have always been the tactics of the far left.  The media covers for it, calling their violence ‘resistance’ or claiming they ‘had no other voice.’ From the violence in the Twin Cities back to the Dayton, Ohio shooter last year to the Christchurch massacre last year and dozens more.

The burden of proof is on you, Red-Flag Rubio.  We have dozens of screenshots Twitter accounts from antifa members calling for violence.  We have videos of them screaming they’re going to ‘take it to the suburbs.’

God-fearing, America-loving gun owners aren’t starting this.  Most of them are avoiding these areas and keeping close to their homes and businesses.  How shameful of Rubio to pretend the violence and destruction are the work of these good people.