And when the mob came to one Saint Louis neighborhood, they found what thugs will find in every suburb: an armed homeowner willing to defend his property.

Check out this couple from Saint Louis, MO, yesterday, where they had to defend their property –and possibly their lives — from an angry, screaming mob.

The couple live at the end of a private drive, and it’s clearly marked so.

But the mob didn’t care.  They marched down the street, screaming and terrorizing the people in the neighborhood.

When they reached this man’s house, he and his wife weren’t having any of it.

His wife –with what looks like just a subcompact handgun, faced down half a dozen men on her own. 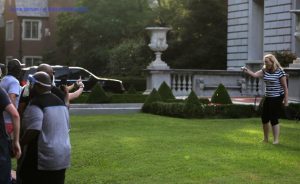 Can we just comment on this stud’s trigger control in the heat of the moment? 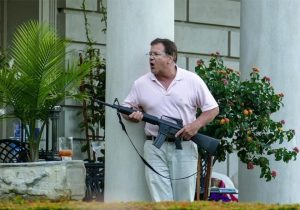 They Picked The Wrong House

Mark and Patricia McCloskey are both lawyers.  They bought the property in 1988 and have spent more than thirty years restoring their home.

They purchased the rundown mansion when they were only 31 and 28 years old, respectively.  This house has literally been their life’s project.

In the face of angry leftists who have shown no restraint when destroying beautiful historical pieces, one can understand the terror this couple felt when they thought this mob — walking down their private drive — might decide to target their house next.

The Timing All Worked Out

Luckily for this homeowner, Missouri added Stand Your Ground law in 2016.  Just four years ago, this guy wouldn’t have a legal leg to stand on!

Likely as not, this couple would have been facing the most corrupt Circuit Attorney in Missouri — St. Louis’s Kim Gardner.  Gardner wouldn’t have batted an eye about tossing this couple in prison for defending their home.

Thankfully, Missouri has had Stand Your Ground since 2016 thanks to the efforts of Missouri Senator Eric Burlison and the members of Missouri Firearms Coalition.   They have stood up for the gun owners of Missouri — and it’s clearly paid off.

The Militia Of The Left

These angry, violent, destructive mobs are not protestors upset about George Floyd — does anybody even remember what sparked this off?

No, this isn’t about racism.  These angry, destructive mobs are the armed and violent militia of the left.  We must start calling them that.

For now, they’re being given a blank check by Democrat leaders who want the instability the mobs are causing — because it helps destabilize President Donald Trump.

But that blank check is only valid for so long.  And there are millions of Americans who won’t stand by while angry violent mobs destroy the country.