Albuquerque, NM  — We reported last week how an Antifa thug chased a retreating citizen while screaming he was going to kill him, and then struck the citizen with his skateboard.  The citizen, Steven Baca, had already discharged his pepper spray while trying to escape the violent mob, and was forced to use his concealed weapon in defense of his life.

We also reported that the mayor of Albuquerque is anti-gun and as far left as they come.  Before most of the facts of the case were known, Mayor Tim Keller was already painting the real victim — Steven Baca — as a violent, dangerous person. 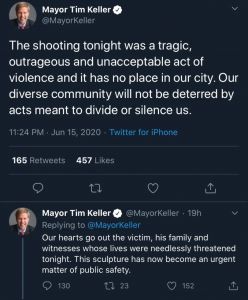 But as more and more information came out –especially cell phone video footage — it became obvious that Steven Baca was nothing of the sort.  Instead, Tim Keller’s beloved Antifa thugs were the real threat to society and had violently assaulted Mr. Baca.

But Mayor Keller wasn’t going to be so easily deterred.  Instead of resigning in shame after embarrassing himself so badly, Keller doubled down like leftists always do.

Why, Parks Are Schools, Of Course!

He announced on Friday of last week that he was issuing an administrative order — that is, he thinks he’s the king of Albuquerque and can issue edicts as such.

Specifically, Keller banned all firearms from city parks.  You can read his edict here.

How did he do that, since he’s not allowed to issue orders that go against state law?

The leftist way: by perverting the meaning of an existing law to accomplish their goals.  Specifically, Tim Keller declared that the city’s parks were ‘educational institutions’ and therefore, people could not carry guns in them.

Keller’s communications director, Matt Ross said on Friday that the ‘new order is an extension of efforts the city began last year to prohibit weapons in facilities used for educating young people. ‘

That means that law-abiding gun owners in Albuquerque have no legal right to stand in their own city parks with their kids.  And they sure as heck can’t stop violent rioting thugs like Antifa from destroying statues and city property without risking a felony.

After all, carrying a deadly weapon on school premises is a fourth degree felony under New Mexico statute. And that’s what the parks are now: school premises.

But Keller and his obviously corrupt legal counsel ignored this part:

B. As used in this section, “school premises” means:

(1) the buildings and grounds, including playgrounds, playing fields and parking areas and any school bus of any public elementary, secondary, junior high or high school in or on which school or school-related activities are being operated under the supervision of a local school board; or

(2) any other public buildings or grounds, including playing fields and parking areas that are not public school property, in or on which public school-related and sanctioned activities are being performed.

Ooooh!  It’s ONLY considered ‘school premises’ if an official, school-sanction event is going on!

Additionally, Keller’s redefinition also conflicts with the school designation in § 22-10A-40.

These people are scum. They only use the law to their own ends, and ignore it when it suits them.

This Is Not Going To End Well

The media is working overtime to destroy America with the help of committed, America-hating leftists like Mayor Tim Keller.

They’ve painted sane, reasonable men like Steven Baca as dangerous, while they themselves are destructive and are openly encouraging the violence in our streets right now.

We’re not alone in thinking that things are reaching a boiling point.  If Trump doesn’t win in the fall, America is in for some rough days.

Be ready. Get VERY involved in state and local politics — that’s our first line of defense!  Make a local community of like-minded people. Find allies. Help your neighbors.

And pray that God will help America one more time.  We are.