The problem with #FakeNews is that it takes time to unravel.  You not only have to expose yourself to all the fake news onslaught, but then have to smell something that smells like swamp rot and start to investigate all the times your gut said, “Is that really likely to have happened the way they said?”

Then you start digging and find example after example of the leftist media intentionally driving their divisive racial and anti-gun narrative.  They hate gun owners and they like to paint all gun owners as white, racist, extremists.

Case in point:  RawStory ran a story with a headline that said: Ohio man arrested for plot to kidnap police and stockpile their weapons for an ‘uprising’.

They shared their article on their own website and twitter with the following photo as the featured image from the story: 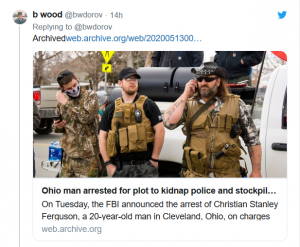 These three white men, clad in tactical gear, are clearly planning an uprising.  By implication, it would seem that the man in the middle is the 20-year-old terror suspect, right?

They went on to tell readers what kind of man this Ferguson was:

“According to a criminal complaint filed today, Ferguson was identified after engaging in several violent and extremist postings made on the cross-platform communication application Discord,” said the FBI press release. “Over several weeks, Ferguson discussed his desire to call police to report a false crime was in progress to prompt a response by law enforcement. Specifically, he expressed an interest in a response by federal law enforcement because he believed they had better quality firearms and body armor to steal. He made statements about tactical options for killing multiple targets and the disposal of their bodies. He reaffirmed his plan to ambush law enforcement, kill them, rob them of their weapons, and start an uprising.”

Hold On A Second

But no, those three guys aren’t terrorists.  Their picture was taken in April at a lawful protest in Helena, Montana.  These three men are members of the Yellowstone Militia of Billings, and they gathered with hundreds of other protestors to “protest Montana’s stay-at-home orders.”

The real suspect, 20-year-old Christian Stanley Ferguson, was arrested “on charges that he concocted an elaborate plan to kidnap law enforcement officers, stockpile their weapons, and build up an arsenal to ‘start an uprising.”

Sounds like an unhinged lunatic, don’t you think?   But thousands of people will read that story and see that picture and think that all these protestors around America are just that: unhinged lunatics.

Here’s a picture of the real suspect:

Oh!  Well, that sure changes the narrative on that story, doesn’t it?   When confronted, RawStory just replaced the image with a stock photo. 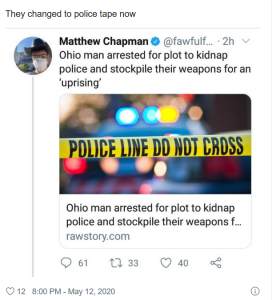 Hours later, the article still didn’t have a picture of the real suspect.  But as of this posting, they have finally done their jobs and accurately reported the news by putting a real photo of the suspect with the story.  Of course, this was only after more pressure from astute readers.

The Leftist Games Get Old

This sort of mis-characterization of gun owners isn’t an accident.  They left has been doing it for years.  But thanks to the internet, they get caught a lot more often now.

No, not all gun owners are anti-police, radical white supremacists.   But the radical left needs to promote social instability.  After all, we don’t need socialism if everybody is happy, prosperous and free, right?

No, the hard left likes to foment anger between groups — be it the rich and the poor, white versus minorities, Republican vs. Democrat, etc.  When violence breaks out –quite often from the left — what happens?  They call for more gun control and a more powerful government.