Illinois Sheriff Fed Up With Lockdowns: “We Are Not Storm Troopers. We Are Peacekeepers.”

DuPage County, IL — The Sheriff of Dupage County, Illinois made a post on social media this week that shows not all state authorities agree with the state’s lockdown over fears of the Chinese Virus.

Sheriff James Mendrick explained that his hands had been tied by the threat of the state pulling funds from his office if he didn’t go along with their draconian rules.

“As Sheriff, I feel that my own 1st amendment constitutional right to free speech has been completely trampled on by a governor who has threatened my Offices’ reimbursement and grant funds as a tool to force me not to speak,” he wrote. “I just can’t do this anymore. I stand with our citizens and businesses of DuPage County who have offered no trouble or no resistance to any rule we put upon them, no matter how strange.”

Not The Sheriff’s Job To Threaten Citizens

Sheriff Mendrick reassured the business owners that he won’t repay their willingness to abide by the rules thus far by arresting or terrorizing them at their businesses if they decide to open for business.

“I’m just having difficulty with what looks like politics pitting everyone against each other and then wanting the police to arrest everyone who disagrees,” he continued. “We are not stormtroopers. We are peacekeepers.”

Mendrick also addressed Governor Pritzker’s mixed messages, saying, “All these years, you have told us that you want law enforcement that thinks before arresting, doesn’t violate your rights and treats their citizens with decency.”

But these latest edicts are the exact opposite of that!

The Sheriff said, “Now you have that and are asking us to regress into what you didn’t want and didn’t deserve. Please let us be the law enforcement you always asked us to be. Non-oppressive.”“I will not victimize lawful residents of DuPage County trying to put food on their children’s table. I’m so proud of our DuPage citizens who have done everything right from the beginning. All I can say is thank you.”

More stories are making national of  businesses clashing with police as they attempt to reopen their businesses.  From a hairdresser who wants to give her employees a paycheck by opening in Dallas, to the owner of a bar facing a SWAT team when she tried to open.  Then, the pitiful and enraging story of the Governor pulling barber Karl Manke’s license to  cut hair.

Thanks For Standing Up

But thanks to the example of stellar law enforcement like Sheriff Mendrick, law enforcement agencies across the country are getting a wake up call: the American People’s rights are not to be trampled.  While the corrupt leaders write the checks, it’s the people that pay your bills.

Our gun rights aren’t up for negotiation if the Governor says they are.  Our right to defend ourselves comes from God, not a piece of paper that a Governor can deny us if they want to close all the sheriffs’ offices.

Here is the Sheriff’s post in it’s entirety, though it’s somewhat hard to read without paragraph breaks. 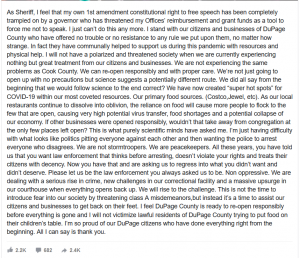