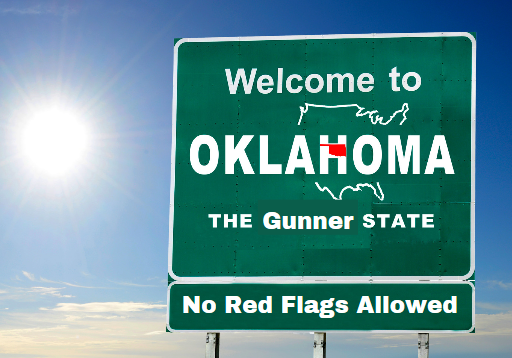 God bless the Sooner State!  Late in the day on Friday, a great piece of legislation passed it’s final vote before heading to the Governor’s desk.  The bill, SB 1081, would bar cities or towns across Oklahoma from adopting red flag gun confiscation laws.

This bill ensures that gun owners in municipalities across the state don’t have to worry that their mayor or city council can pass any Red Flag or “Extreme Risk Protection Orders” — and open the door for their guns to be taken away without due process.

Senate Bill 1081 was one of the very last bills that passed the legislature and only received its final vote a few hours before the legislature adjourned on Friday.   Republican Governor Kevin Stitt has until Thursday to sign the bill into law.  It is expected that he will sign it, but we’ll keep you posted.

Two Second Amendment champions sponsored this bill.  They are Sen. Nathan Dahm and Rep. Jay Steagall.  The two Republicans say that their goal was to add an extra layer of protection to citizen’s rights in the face of so much failure from politicians.

When Senator Dahm first sponsored the bill back in September of 2019, he wrote an op-ed piece to clarify his thoughts on Red Flags. In it, Dahm said,

“We cannot keep playing defense while expecting our constitutional rights to survive for very long with politicians who regard them as an inconvenience or even an obstacle to their schemes. Simply standing our ground and waiting for the gun control lobby to strike again has not worked — and it never will. With the passage of SB 1081, it is my hope that lawmakers across the nation will become inspired to champion similar legislation in their own states (and Congress) that not only safeguards the rights of every American but pre-emptively takes a stand against future efforts to dismantle our constitutional rights.”

Meanwhile, Representative Steagall said that he was proud to sponsor the nation’s first “anti-red flag” law.  While 17 states have passed Red Flag Gun Confiscation laws, Oklahoma has not.

In fact, while many states were discussing Red Flags, Oklahoma was busy signing Constitutional Carry into law.  “Permit-less carry” went into effect there just a few months ago, in November of 2019.

This may be a first, but it’s likely that it won’t be the last we see of states defending themselves against Federal encroachment on gun rights.  If Joe Biden makes it to the White House or if HR 5715 were to pass, many more state and local bodies will likely follow Oklahoma’s leading.