Elk River, MN–Sheridan County Sheriff Joel Brott made headlines in Minnesota this week after posting an open letter to his constituents on the official county sheriff’s facebook page.  The letter detailed his personal and professional opinion on gun control.  He said that the letter was prompted by the number of his constituents who had contacted his office to ask his opinion on gun control bills and whether their rights were safe.

Once again this year, those bills filed in the Minnesota legislature included Red Flags, Universal Background Checks, and more. The Sheriff wanted to be crystal clear that he opposes those measures.  You can read it all here: 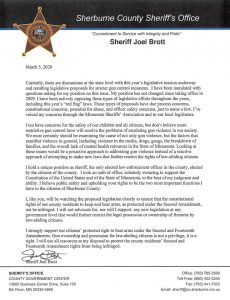 Here are some key takeaways:

“I too have concerns for the safety of our children and all citizens, but I don’t believe more restrictive gun control laws will resolve the problems of escalating gun violence in our society.  We most certainly should be examining the cause of not only gun violence, but the factors that manifest violence in general, including violence in the media, drugs, gangs, the breakdown of families, and the overall lack of mental health resources in the State of Minnesota.”

When referencing the new gun control being proposed, Brott had this to say:

“I have been actively opposing these types of legislation throughout the years, including this years “red flag” laws. These types of proposals have due process concerns, potential for abuse, and officer safety concerns just to name a few.”

He went on to say that he’d voiced his concerns and made his voice heard to the Minnesota Sheriffs’ Association and to the legislators that represent his district.

Minnesota Republicans Are Short On Courage

For those who don’t keep current, Minnesota is in a five-year battle over gun control.  While the rest of the country scrambles for toilet paper, Minnesota Republicans are busy scrambling for a spine.

See, the Minnesota GOP held both the House and the Senate in 2017 and 2018.  This was after Mike Bloomberg had begun pouring hundreds of thousands of dollars into their state trying to pass gun control.

When they had the chance to pass Stand Your Ground or Constitutional Carry, they didn’t do a thing. They knew that Bloomberg was targeting their state for nasty new gun control laws and they did NOTHING!  In fact, they didn’t even bother to put Constitutional Carry or Stand Your Ground up for a vote.  They had the majority in BOTH houses and didn’t even bother to try to vote for the two most pro-gun bills out there.

The Senate Majority Leader, Paul Gazelka, has even commented that they won’t be putting Stand Your Ground or Constitutional Carry up for a vote.  And it’s not just Gazelka who needs a spinal implant.  The Chair of the Senate Judiciary Committee, Republican Warren Limmer, has even said that the Republican controlled Senate won’t consider bills like Constitutional Carry and Stand Your Ground because they’re “extreme fringe” bills.

Where Have All The Cowboys Gone?

Sheriff Joel Brott is over here standing up for his constituents and their gun rights.  But he’s not only facing attacks to the chest from Democrats over his pro-gun stance.  He’s also fending off stabs in the back from Republicans who won’t stand up with him, but leave him to stand alone on the field of battle.

Disgusting.  Traitors.  Sheriff Brott is a patriot.  Those Republicans need to get taken out to the proverbial woodshed for leaving him and every other Minnesota second amendment supporter high and dry.

Maybe Minnesota’s gun owners could start a Go Fund Me to buy a spine for the Republicans up there.  Just one.  They can just pass it around and take turns.  Even one spine would be an improvement, after all!