As the world gets crazier and crazier, it’s no surprise that anti-gun corporations and politicians are trying to exert as much control over America’s gun owners–and all her citizens–as possible.

Case in point.  A Ventura, California Wal-Mart put up a sign yesterday on a well stocked ammunition display case saying that they were not selling ammunition at this time. 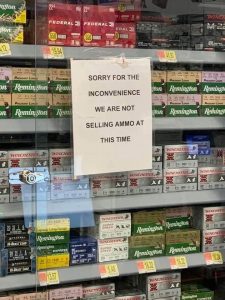 The image was posted by a Kelly Bass Padgett on her personal Facebook page.  Padgett reported that she took the photo in her local Wal-Mart store on Sunday, March 15th.  A comment posted by Facebook friend confirmed that he, too, had seen the sign in that Wal-Mart store.

Some readers were suggesting that possibly Wal-Mart was too busy in the grocery department to staff their Sporting Goods counter.  But while that sounds plausible, it’s in the news nationwide that gun stores and ammo retailers are experiencing a huge increase in orders.

So while their grocery department might be swamped, it’s likely that their sporting goods–aka preparedness items–are also in high demand.

We have to think this is a decision that Wal-Mart corporate approved of before this store took this step.  After all, they’ve already stopped selling most ammo in their anti-gun stores last year after making a secret alliance with Bloomberg and the anti-gun lobby.  They no longer carry 9mm, .223, .556 or really any other round that is typically used in self-defense weapons.  If you want to go hunting, they keep a few options on the shelf, but otherwise, you’re out of luck.  But now it looks like they’re halting even that!

When A Crises Comes, Watch For Government Overreach

While mayors across the country are declaring states of emergency that grant them power over the sale and even transportation of guns and ammunition, this move by Wal-Mart isn’t doing anything to allay the fears of Americans.

We’ll keep you posted if we see this spreading.  We say this all the time, but it’s truer than ever during this Corona quarantine hysteria: carry every day, everywhere you can.