Mass Shooting In Seattle Ignored! Why? Because Two Perps Already Had 65 Arrests/35 Convictions!

Between the Super Bowl, impeachment headlines and the hysterical Common Core math the Democrats are using in the Iowa Caucus, we wanted to tell you about some news you won’t hear!  There was a terrible mass shooting on January 22nd that’s gone unreported and is rapidly disappearing down the memory hole.

It happened in Seattle–a town filled with anti-gun zealots who are so far left they’re hard to find on a map.  Why isn’t half the city marching in the streets?  Normally they’d be calling press conferences and flying in David Hogg and all the regular media circus. What gives?

Because these two thugs don’t fit the narrative!  Check out these two stellar young men: 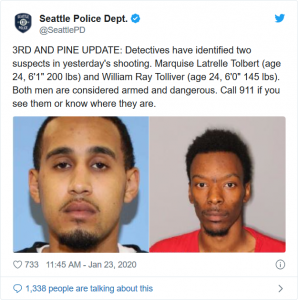 These two gentlemen, Marquise Tolbert and William Ray Tolliver, both 24, were walking to McDonalds when they got into an argument.  They pulled out their illegal handguns and engaged in a Hollywood-style ghetto gun battle.

In the chaos, seven people were shot and one woman was killed.  One shooting victim was a 9-year-old boy.  The boy was released from the hospital on January 24th after a bullet shattered his femur.

And it gets even worse.  These two young men were familiar to the police.  In fact, both already had outstanding warrants at the time of the shooting.  One of the men has already been arrested a staggering 44 times!  He even has 20 criminal convictions. The other has at least 21 arrests and 15 convictions!

These two thugs had outstanding warrants and more than 65 arrests between them!

Friends Through It All!

Previously so upset with each other that they were willing to draw guns and unleash carnage on innocent bystanders, the two ran off together after the shooting.  They were located by police in Las Vegas, Nevada, and will be extradited back to Seattle.

That’s friendship, man.   If you can go 15 rounds of 9mm with a buddy and still be thick as thieves, that friendship isn’t going anywhere.

If The Media Is Silent, It Will Go Away

But gun control advocates don’t want to talk about this mass shooting.

First of all, these men were both convicted felons, and thus already not legally allowed to purchase or own a gun.  And yet–shocking, we know–they broke the law and had guns anyway!

The media also won’t talk about this shooting because the left wants to blame dangerous, racist white men for ‘gun violence’ and these two don’t fit the picture.

Also, this shooting happened in a ‘gun free zone’ near a mass transit hub.  See how that turned out for the unarmed folks who were obeying the gun free zone signs?  Not so great.

Seattle, like New York and other tyrannical anti-gun cities is proud of their leniency towards violent criminals, but then wails and moans when these same criminals commit violent crime.

You can’t fix stupid.  All you can do is distract the people from the man behind the curtain and hope that you’re still fooling your crowd.

These sorts of thugs’ crimes are used to conjure up statistics about ‘gun owners’ without ever admitting that these two were disqualified from that pool years ago!  And why in hell weren’t they already in prison?  Sixty-five arrests?!

Share this around before it gets buried by the stories the #FakeNews want you to see!