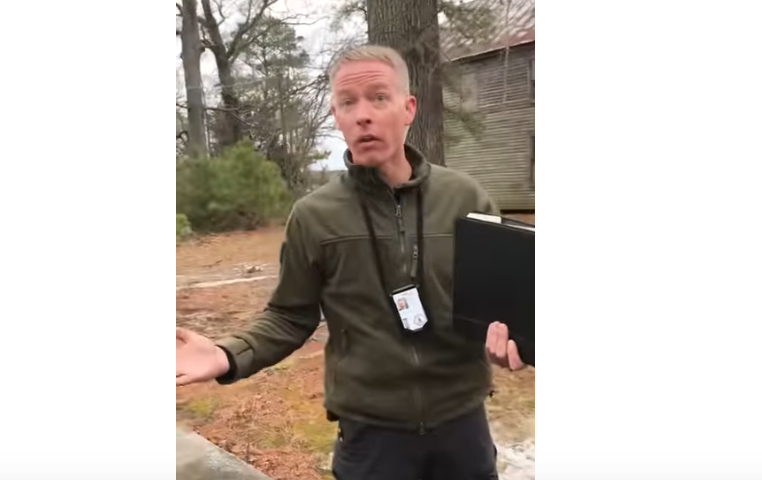 Northumberland County, VA–A man posted a cell phone video to YouTube on Sunday showing two Virginia State police questioning him on his front steps. In the video, the gentleman identifies himself as a Mr. Wagner, the son of Captain Bill Wager, a former captain in the State Police.

As the conversation unfolds, the two officers say that they received a tip that a man was seen going around the Capital Square, touching buildings and taking pictures.

So these two agents of the State of Virginia drove over 100 miles to ask this guy what he had been doing there!

These guys were undeterred!  They further said that several police officers watched a video of him on the grounds that day and thought he was doing ‘pre-operational planning.’

You’re going to want to watch this whole video:

This is how it starts, folks! You aren’t allowed to walk around the Capital building and take pictures. They can control all the entrances and exits and disarm you and declare the a state of emergency and ban public parking and etc etc etc….all with taxpayer dollars.  But if you show up with your camera and tap on a pillar, you’ll face agents on your porch!

Initially it was just ‘a tip’ that had lead these agents to his house.  But the law-abiding citizen pointed out that this was outrageous, and exactly why Red Flag laws are so terrible!  A simple tip from a random citizen landed him under this sort of scrutiny for walking around a public place!

That’s when the detail came out:  the tip wasn’t from a random stranger who saw him and thought he was suspicious.  He was under surveillance by Capital Police the entire time he was visiting the Capital on Monday.  Capital Police were watching him on camera the entire time, and the only ‘tip’ was them tipping off these two agents to go question him.

Are There No Limits If They’re ‘Doing Their Job’

People who will do this sort of dirty work for Northam need to have a long look in the mirror. Boys, if you can’t tell when you look in the mirror if you’re the good guy or the bad guy, how the heck do you expect us to be able to tell?