In the days leading up to Lobby Day in Richmond, Virginia, the left was working overtime to paint gun owners as nothing but a group of white supremacists.

News stories circulated of people arrested who were allegedly on their way to Richmond and allegedly members of a White Supremacists group.

Now, we have no idea if that was #FakeNews or not, nor do we care.  We do know that the Left likes to brand any America-loving, crime-hating gun owner as a racist who hates people.

So as the rally drew closer, more and more hype was directed at causing this division in the minds of American citizens.  They droned on and on:  ‘Gun-owners are violent and unstable people and their arguments are just a cover for their racism.’

That’s why it made us cheer inside to see the real crowd at the rally yesterday.   The entire radical left’s argument was put to the lie, and that was just the last line item.

First, tens of thousands of armed people attended without incident.  There was no rioting, no cars burnt, no mobs of destructive teens, no blocked freeways.  So much for violent and unstable.

Second, the accusation that we hate all cops or are somehow against the rule of law.  The fact that law-enforcement–in uniform!–joined the pro-gun crowd made that an obvious smear attempt.

Finally, the accusation that we’re just all racists was shown to be another figment of the deluded Leftist hive mind.  Look at these pictures of folks attending the event!

We asked this guy if we could take his picture.  His only response: as long as you’re not going to use it to advance the anti-gun agenda one inch!  Hell no we aren’t!

Hysterical!  This couple was onto the false rhetoric and mocked it openly! 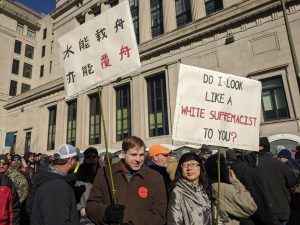 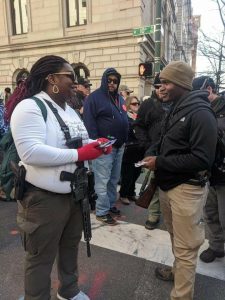 A reader sent us these pictures, so we don’t know who to credit, but we loved them! 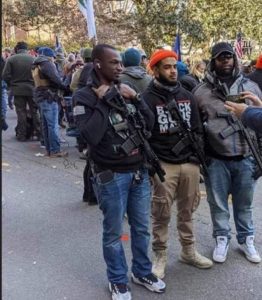 The left doesn’t think that ladies like these exist!  Poof!  A miracle!

But…but…they can’t get along!  They leftist mind can’t handle it!

Send this article to anybody you see who buys into the Marxist, classist, racist lie that divisions are hatred are the only thing Americans have in common.   We have a damn fine country in common, and the Second Amendment to protect ALL of our rights!

We reject the divided nation of Marxism, and all of these folks obviously do, too!