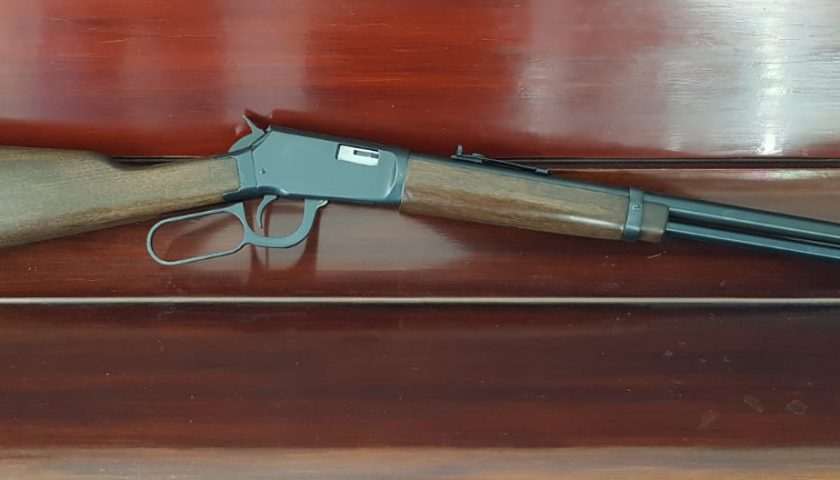 Here’s the back story. Dieuwe de Boer runs a Christian, right-wing blog in New Zealand that opposes climate change narrative, abortion, and the tyrannical gun confiscation laws passed in 2019.  His ideas might not be popular, but they’re sure not illegal and he’s certainly not alone.

He published an article on December 28th, mocking the pathetic compliance rate of New Zealand’s gun buyback program.  He pointed out that IF it was as successful as authorities were claiming, the buyback only achieved between 13% and 17% compliance.

What a joke!  His article also pointed out how there had been a school shooting just the week before, but that it hadn’t made an international splash like the Christchurch shooting.  Why?  Because New Zealand was supposed to be safer after they confiscated all the dangerous guns!  This doesn’t fit the narrative!

But his December article aside, last year de Boer had shared a photo of an old “.22 lever-action rifle” on his website.  Back in March of 2019, de Boer published on his personal website and his own social media pages a letter with commentary to legislators about the terrible new bill they were proposing.   (That’s how the legal system works in New Zealand.  Legislators propose a new law and then there is a short time period where people can write their legislators to comment on the proposed bill.)

This is what de Boer was doing when he published his photo of the old ‘cowboy’ gun.  He included the old photo with an addendum, pointing out the insanity of a bill that would essentially make this old .22 long rifle a ‘semi-auto’ weapon that would be banned under the new law.  They weren’t after military guns.  They weren’t after scary guns.  These were boring old rabbit-hunting guns.  Essentially, he pointed out, they were after everybody’s guns and using words like “military assault rifle” to justify it to the public.

The Left Doesn’t Forget An Enemy

This blogger has published a letter mocking their laughable compliance rate.   And he had previously published a picture of a gun that is now illegal to own.

What do you think is coming for him?

Twenty armed cops show up at his house after supper.  His wife is nursing a four-week-old baby.  His children are waiting for the  ice cream he promised them before bedtime.   The cops in full tactical gear knock on the door.  They shoved a warrant in his face, which tells him that he’s being searched under Section 6 of the Search and Surveillance Act 2012.

The alleged infraction?   That old .22 lever-action long rifle was capable of holding a magazine that is now banned, and thus must be handed over. Never mind that there was no magazine in the picture.  Never mind that de Boer didn’t own a magazine like that, period.

Further, de Boer didn’t own the gun at all, anymore.  He had sold or given it away before the date where it would have been illegal to do so.

But the police didn’t believe him.  They turned his house upside down.  His wife and kids were crying, they had to call for more backup because it was taking so long to search the home.  But after hours of looking, the gun wasn’t there.  The police implied that they’d have to raid the houses of his friends and family until the gun ‘turned up.’

We Get The Intended Message

The cops left empty-handed, of course.  But de Boer says that the message was heard loud and clear:  social media is being used to profile and raid people in New Zealand.  And if you speak out against gun control, you can expect to be the first ones raided.

See how these radical anti-gun people work? This is why American gun owners needs to fight these new leftists tooth and nail while we still have the right to do so.  This stuff is ugly.  It’s real.  And the radical left wants it in America, badly.